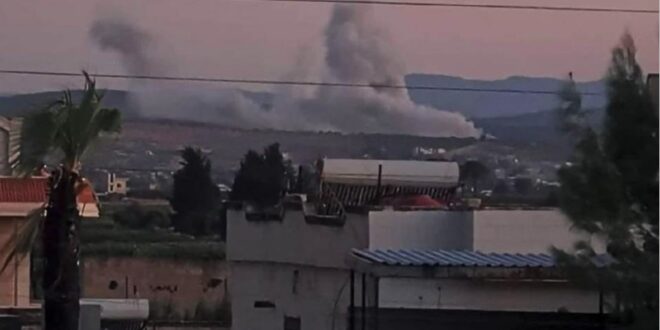 Israeli airstrikes hit warehouses, parking lots, and even the unit’s head office in the raids that attacked Syria’s Damascus International Airport and other locations south of the capital.

According to the report, the IDF could have killed three central figures from the agency in the attack. Instead, Israel preferred to send a message only by attacking the agency’s property, indicating that Sayed Reda, the unit’s head, is practically in charge of the relief office in Syria and presides over the Damascus branch.

“Reda has been in the region for many years; for a considerable period, he previously ran other aid agencies in Tehran,” the network said. “The unit’s other central figure is Abdullah Ebadi, who works under Reda’s supervision. Ebadi coordinates the various smuggling operations, via handbags, from Iran to Syria.”

“The third character is Masam Maktoob, who is responsible for the agency’s transport operations,” the network continued. “His task is to integrate all smuggling operations from Iran and make them feasible in Syria. In the past, Maktoob served in Unit 190 of the Quds Force.”

“The unit was established in 1990 and is based in Damascus. It has a presence in other areas of Syria, including Latakia, Aleppo, Hama, and Deir Ezzor,” the report said.

These reports come at the same time that Israel revealed that Iran had founded an industrial-military complex in the Masyaf region, northern Syria.

The officer named Nitzan, who presides over the IT intelligence’s northern sector for the research arm of Israeli military intelligence organization Aman, said that Iran uses Syrian military facilities to produce weapons, and missiles in particular. Nitzan noted that these activities continue in secret and without coordination with Bashar al-Assad’s regime, nor with even obtaining the regime’s permission.

Speaking to Israel Today on Wednesday, the officer noted that those in charge of Iran’s military industries in Syria enjoy close ties with Quds Force commanders. They also receive salaries for their role in producing dozens of missiles a year.

The officer pointed out that Al-Wasat Four is the most important facility amongst Syria’s military industrial facilities. It specializes in the production of weapons in the Masyaf area. He indicated that this facility includes the Center 4000, which is specifically tasked with missile production.

Post Views: 77
Previous Recap: New Steps in Rapprochement Between Turkey and Syria
Next Transition from Security to Political Dialogue Between Damascus and Ankara Not Far