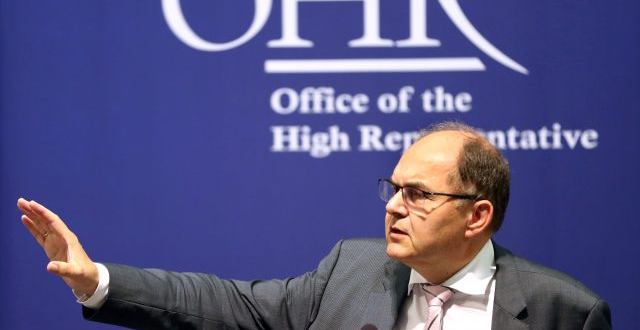 The EU has always been tempted to hatch deals with powerful politicians – but this has only cemented the unhealthy grip of ethno-politics on the country.

Despite the proximity of general elections in Bosnia and Herzegovina, the country’s High Representative, Christian Schmidt, has continued to flirt with the incomprehensible step of imposing electoral reforms that would cement the concept of ethnic division as the state’s guiding logic.

Such moves have prompted outrage, with some thousands taking to the streets of Sarajevo in opposition. Various voices have demanded that the High Representative desist from using his so-called “Bonn Powers” to placate the interests of the Bosnian Croats, and instead work to engage a broader array of actors in comprehensive reform consultations.

The reactions served as a timely reminder of an approach to policy making that continues to blight Bosnia and Herzegovina; a lack of engagement with the genuine needs and concerns of citizens and a tendency to seek backroom deals over participatory politics.

That the proposals are alleged to have originated in neighbouring Croatia only further exacerbated an already disbelieving population, many have whom have lost faith in their ability to transform their own society. Thousands have already turned their backs on the country, most of them for good, having grown disillusioned about the prospects for change.

One of the consequences of resort to the Bonn Powers over the past 20 years or so is the manner in which reforms have been imposed from above. The Office of the High Representative, OHR, has regularly made it clear to recalcitrant politicians that opposition would not be tolerated. Legislation was drafted by foreign experts and rubber-stamped by elected officials.

Whilst this allowed the country to achieve reforms that otherwise wouldn’t have been possible – unification of its armed forces, for one, or the establishment of an indirect taxation system which provided an independent source of funding – it has reinforced a political culture whereby the legwork required to build consensus was redundant.

This taint and temptation has remained. The OHR and EU are both regularly criticised for engaging primarily, and often solely, with the heads of Bosnia’s leading politicians outside the country’s institutional channels. The paradox is that these politicians need not hold elected office in order to hold power and influence (which they derive from control over their respective political parties), and be treated as a key interlocutor by the international community. Among the largest beneficiaries has been the restauranters with ample and secluded backroom space.

One reform agenda has been replaced with another; a list of undertakings that offer a promise of progress only to be immediately undermined by the paralysis of politics. Commitments are taken at face value, with few mechanisms for accountability given the manner in which they were conceived and agreed. The international community and domestic politicians alike have a shared interest in projecting success where there is none.

The battle for the underlying conception of Bosnia and Herezgovina – between civically-oriented integrists and those grounded in an ethnically-delimited and delimiting politics – already favoured the latter. By virtue of the institutional capture and a divisive electoral logic, the hold of ethno-nationalists has been cemented over the course of the past decade.

Any pockets of promise which exist throughout Bosnia-Herzegovina, notably at the municipal level, are regularly shunned in favour of supposed quick fixes. Voices who’ve demonstrated what is possible in their own local communities are applauded and then ignored; invited for photo shoots before being photoshopped out of political contestation.

The Sarajevo protests rekindled memories of February 2014, when accumulated frustrations led to the burning of cantonal government building in Tuzla and mass mobilisations in Sarajevo, Mostar, Zenica, and elsewhere. Though this groundswell of energy, empitomised by the establishment of “plenums”, eventually subsided, thanks in part to catastrophic floods that spring, broad swathes of Bosnia’s population demonstrated that they would not stand idyly by as their country stagnated.

If Bosnia-Herzegovina is to thrive, and it is a big if, policy needs to be formulated in the corridors of Sarajevo, Banja Luka, Mostar, or elsewhere, not in Zagreb, Belgrade, or Brussels. There are no longer any shortcuts to fundamental reform in a country beset by a political system which encourages compartmentalism and division as opposed to collaboration and integration.

The policy-making agenda must be shaped internally not externally. Domestic coalitions which transcend existing barriers need to be carefully conceived and cultivated; requiring where necessary compromises that may go against the grain of their stated undertakings. This era of elite political contestation must be confronted by new movements and new voices.

To that end, it is time for civic activists to pursue elected office. Those who’ve stood outside the political arena yet voiced their stance on specific issues must fight elections at whatever level they feel that can have a tangible impact. And voters must be made to feel more confident that if they back such options, that their voices will be heard.

The international community must engage with, but not seek to exploit any of the novel energy and legitimacy that emerges. It must navigate the challenge of resourcing without restricting, of catalysing without constraining; which means providing the means without endeavouring to piggy-back on the momentum created. It is an approach that will sit uneasily with the technocratic programming of Brussels, but one that can unlock the undoubted potential that Bosnia still possesses. It is a potential, however, that has only a very limited lifespan.