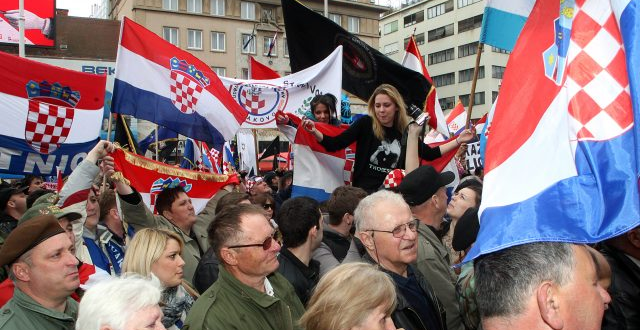 Recently-published census data shows that the number of Serbs and other ethnic groups living in Croatia has fallen – another sign that the country’s minorities need stronger legal protection amid continuing attacks on their rights.

A long-awaited batch of data from last year’s population census in Croatia was finally released on September 22. Such was the anticipation that most daily newspapers decided to report it on their front pages.

Jutarnji list, one of the most popular dailies in the country, ran its front page story with the headline “Fewer than 30% Serbs in Vukovar”. Its main competitor, Vecernji list, ran a front-page story the next day dedicated to the proportion of Serbs living in other counties and towns.

To outside observers, all this could seem strange. The figures made available last week were not the first batch of data on last year’s census. In January, the country was already shocked to find that it lost almost ten per cent of its population in the last ten years, mostly due to work-related emigration to other EU countries.

However, the exact data on the ethnic composition of the population, only published now, caused as much if not more interest. Particularly because the percentage of citizens with an ethnic identity other than Croatian dropped significantly, causing political changes in many localities.

Ever since its independence and international recognition in 1992, Croatia has had special rules on the rights of traditional minority ethnic groups, most notably Serbs, but also Italians, Czechs, Hungarians, Roma and others.

These rules were a prerequisite, first for the international recognition of Croatia’s independence, and then much later for its membership of the EU. Many of these rights are, in legal terms, directly linked to the results of population censuses, which are conducted every ten years.

The Vukovar issue mentioned on the Jutarnji list front page is a case in point. The minority rights legislation prescribes that a town or municipality will officially be multilingual if a particular minority groups forms at least a third of its population.

The last census in 2011 showed that ethnic Serbs constituted some 35 per cent of Vukovar’s population. The then national government attempted to introduce bilingual signs in the Serbian language and Cyrillic script as well as in Croatian and Latin script on public institutions in 2013. But this was met with violent protests, mostly led by Ivan Penava, then a political upstart, but now the mayor of Vukovar and the leader of Homeland Movement, a far-right political party.

Penava used the protests, and the numerous inter-ethnic incidents that followed, to secure control over the city from 2014 onwards. He stubbornly refused to introduce bilingual signs, promising that the 2021 census would remove the legal obligation to install them.

No wonder, then, that he has made several celebratory statements after it turned out that the percentage of Serbs in Vukovar had indeed fallen below the legal minimum for bilingual signs to be installed.

Vukovar, of course, isn’t just any town. It the biggest multicultural town in the country and also the site of one of the worst war crimes committed against Croats by Serb forces during the 1991-95 war.

And while in Vukovar the recent census doesn’t really change much, as bilingualism wasn’t respected even with the legal minimum satisfied, some smaller towns and municipalities might be tempted to restrict minority rights after the publication of the census data.

The current legislation, however, doesn’t ban multilingualism if a particular minority doesn’t constitute the a third of the population. The latest Council of Europe resolution on the implementation of the Framework Convention for the Protection of National Minorities clearly states that the current legal minimum for bilingualism in Croatia is too high.

The county of Istria is bilingual, with Croatian and Italian officially used even though ethnic Italians constitute just five per cent of the population.

An analogous situation with Serbian language and the Cyrillic script is, however, almost unimaginable as their use is seen as provocative by a section of the public in most of the country.

Bilingualism isn’t the only minority right legally dependent on census results. Multi-ethnic municipalities, towns and counties have special provisions to ensure that political representation reflects the ethnic composition of the local population. For example, a town in which a fifth of the population have minority ethnic backgrounds should also have a town assembly with roughly a fifth of its members coming from minority backgrounds, according to the law.

The sharp reduction in people declaring themselves to be from minority backgrounds in the latest census means there will be much less political representation for ethnic minorities at the local level. This also includes minority deputy county prefects, a largely ceremonial role filed by minority representatives designed to symbolise a county’s multiculturalism. According to the last census, the Serb community in Croatia will lose four out of 11 minority deputy county prefects, and the Czech community will lose its only one.

Most of the public discussion about the latest census results has been concentrated on specific, mostly political minority rights. Much less has been said about the social causes and consequences of the slow but undeniable disappearance of traditional communities in Croatia.

The number of Serbs in Croatia, for instance, has fallen by a staggering third between 2011 and 2021, from 187,000 to 124,000 people. The community now constitutes barely three per cent of the population, down from 17 per cent a century ago.

In terms of numbers, Serbs in Croatia have never again been as numerous as they were pre-World War II, partly due to a genocidal campaign by the fascist Ustasa movement. However, by far the largest fall in the Serb population has been recorded since the war in the 1990s when hundreds of thousands left as refugees mostly to Serbia, Bosnia and Herzegovina and other countries.

The number of Serbs in Croatia, however, continues to drop significantly from census to census, even decades after the war and in areas that were not significantly affected by the war, like multi-ethnic Istria.

What could be the possible reasons for this? It’s true that Serbs in Croatia disproportionately live in the most underdeveloped regions, and the ones most affected by depopulation. These include the Banija region, some 60 kilometres south-east of the capital Zagreb, which was hit by a devastating earthquake at the end of 2020.

Natural disasters and economic reasons are just a part of the issue. The percentage, not just of Serbs but of other minorities too, continues to drop, even in economically relatively prosperous areas. The number of Serbs in the capital Zagreb and Croatia’s largest port Rijeka, for instance, fell by a third.

But for other minorities, including ones with significantly less social stigma than Serbs, the statistics are not much better. The numbers of both Albanians and Bosniaks have dropped by 20 per cent in Zagreb; Italians in Rijeka by a third and in Istria by a fifth – significantly more than the drop in the majority ethnic Croat population.

Should any of this actually worry anyone? After all, assimilation of minority groups to majority groups often occurs in many parts of the world. In the case of Croatia, there’s obviously more to it, however.

The constant ethnic homogenisation of Croatia over the decades hasn’t made Croatian politics less ethnically-based. Minority organisations still regularly warn that walls of Croatian cities are covered with anti-minority hate messages, which are also heard at most sports events. Political careers are still being made and media programmes sold by obsessively attacking the rights of the country’s now dwindling ethnic minorities.

All this also has regional consequences. As the countries of the region become less and less ethnically diverse, there is less incentive to improve regional cooperation. At the same time, worsening conditions for ethnic minorities remains a stumbling block for relations between countries and a permanent source of nationalist grievances.

For Croatia, the current legal mechanisms for minority protection, which are only partially respected, have shown themselves to be less than adequate. It would seem that much more dedication to ethnic, cultural but also political pluralism in the country is dearly needed.