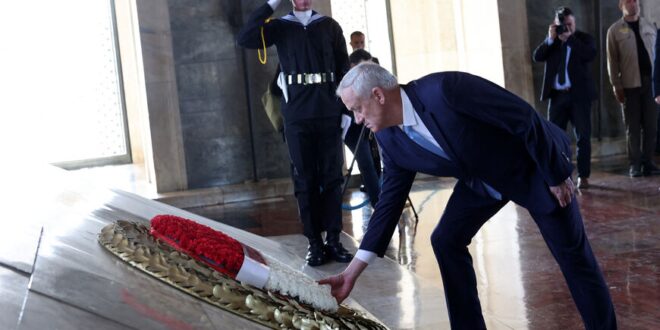 Israeli defense chief stressed stability in the Eastern Mediterranean during his landmark visit to Ankara amid lingering tensions between Turkey and Greece.

Gantz met with Turkish President Recep Tayyip Erdogan and his Turkish counterpart, Hulusi Akar, during his official visit to Ankara today, marking the first of its kind since more than a decade and coming after the two countries decided to fully restore their diplomatic ties in August.

“We agreed on strengthening formal defense ties between the countries after a decade,” Gantz tweeted after his meeting with Akar, which he described as “long and good.”

“It is no secret that our ties have faced challenges,” Gantz told journalists during a joint presser, flanked by Akar. “Moving forward we must adopt a steady, positive approach in our relations, maintaining open dialogue,” he added.

“I’ve instructed his staff to begin the procedures required in order to resume working relations.”

Akar hailed a “fresh start” to ties between the two countries, saying that they discussed the ways to improve cooperation in “defense, defense industry and military-security” fields.

“Improvement of our ties and cooperation with Israel, particularly in defense, security and energy fields will lead to … significant contributions to regional peace and stability,” Akar added.

Turkey and Israel agreed to fully restore their diplomatic relations after more than a decade of sparring over a series of rows starting with the deadly Israeli raid on a Gaza-bound Turkish flotilla in 2010.

The rapprochement comes as part of Ankara’s efforts to restore its ties with its former regional rivals — Israel, Saudi Arabia, Egypt and the United Arab Emirates — and is partly aimed at breaking its economic and political isolation in the region and counterbalance the deepening defense ties between regional countries and Greece and Cyprus — Ankara’s traditional rivals — in the Eastern Mediterranean.

Gantz also stressed stability in the Eastern Mediterranean amid lingering tensions between Turkey and Greece over conflicting territorial claims.

“Our future is promising yet dependent on our shared interest of maintaining security and stability in the region,” Gantz said.

“The Middle East and the East-Med regions are changing. Alliances, some of which were unthinkable not long ago, are being built in the face of alarming threats,” he added, saying that Turkish-Israeli “ties are a positive addition as we maintain strong partnerships with our friends in Greece, Cyprus and the Gulf countries.”