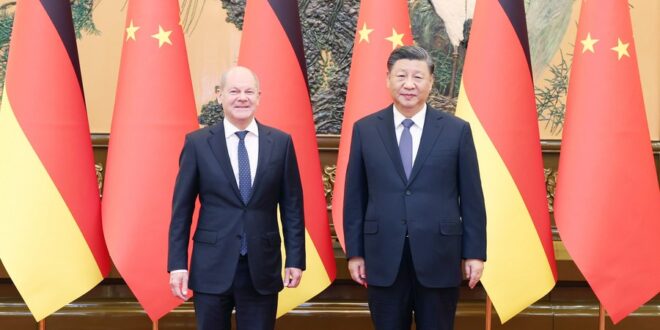 Chinese President Xi Jinping met with German Chancellor Olaf Scholz on his official visit to China at the Great Hall of the People in Beijing on Friday.

Xi noted that Scholz is the first European leader to visit China after the 20th National Congress of the Communist Party of China (CPC), and that it is also his first visit to China as the Federal Chancellor.

Xi said the visit will further enhance the mutual understanding and trust between the two sides and deepen practical cooperation in various fields, and gives the two sides an opportunity to plan for the growth of bilateral ties going forward.

Xi stressed that China-Germany relations could not have reached today’s level without the extraordinary vision and political courage of generations of Chinese and German leaders, mentioning this year marks the 50th anniversary of China-Germany diplomatic relations.

The five-decade journey shows that as long as the two sides follow the principles of respecting each other, seeking common ground while reserving differences, maintaining exchanges and mutual learning, and pursuing mutually beneficial cooperation, bilateral ties will keep going in the right direction on the whole and making steady progress, he said.

Noting the complex and fluid international landscape, Xi underscored the need for China and Germany, two major countries with great influence, to work together in times of change and instability and contribute more to world peace and development. China will work with Germany for a future-oriented all-round strategic partnership and for new progress in China-Germany and China-Europe relations.

Xi briefed Scholz on the 20th CPC National Congress, with a particular focus on the essence of Chinese modernization. He pointed out that modernization is an aspiration and goal shared by people in all countries. That said, countries should choose their paths to modernization in light of their own national realities.

The president said China has been upholding and promoting world peace through its own development. In this process, the development of China and that of other countries have become more interconnected and mutually reinforcing. China will stay committed to advancing high-standard opening up, keep to the right direction in economic globalization, promote an open world economy, and expand converging interests with other countries.

Xi stressed that political trust is easy to destroy but difficult to rebuild and that it should be nurtured and protected by both sides. He cited a quote which former German Chancellor Helmut Schmidt used and which he appreciated, that political leaders should have the serenity to accept the things they cannot change, the courage to change the things they can change, and the wisdom to distinguish between the two.

“It is important that China and Germany respect each other, accommodate each other’s core interests, adhere to dialogue and consultation, and jointly resist disturbance from bloc confrontation and attempts to see everything through the prism of ideology,” Xi said.

He called on both sides to keep to the overall direction of bilateral ties from a strategic height, pursue the biggest common ground in a constructive manner, and advance practical cooperation with an open mind to create conditions for long-term and steady growth of bilateral ties.

“There should be no self-imposed restrictions or unrealistic expectations,” Xi said.

Noting the high degree of stability and consistency in China’s policy toward Germany, he called on Germany to follow a positive China policy for the mutual benefits of both countries.

Xi pointed out that over the past five decades, bilateral practical cooperation has kept deepening, with two-way trade growing by almost 1,000 times, serving economic and social development in both countries.

“The two sides should make the pie of common interests still bigger,” he said, adding that while exploring more cooperation potential in traditional areas, efforts should be made to energize cooperation in emerging fields such as new energy, artificial intelligence and digitalization.

China will work with Germany and Europe to further deepen aviation cooperation, conduct exchanges and cooperation on COVID-19, increase interactions and mutual learning on green development and ecological conservation, and encourage more people-to-people exchanges, he said, calling on Germany to join China in resisting protectionism so that the fruitful bilateral cooperation can deliver more benefits to the two peoples.

Xi pointed out that China-Europe relations bear on global stability and prosperity in Eurasia and should be maintained and developed with efforts from both sides.

Xi said China always regards Europe as a comprehensive strategic partner, supports the strategic autonomy of the European Union and wishes Europe stability and prosperity. China maintains that its relations with Europe are not targeted at, dependent on, or subjected to a third party.

The more complex and difficult the situation becomes, the more important it is for China and Europe to uphold mutual respect, mutual benefit, dialogue and cooperation, Xi said. “China will work with Germany and with Europe to step up coordination and cooperation in international affairs and jointly look for solutions for such global issues as climate change, biodiversity and food security.”

Scholz expressed his pleasure to visit China in a year that marks the 50th anniversary of Germany-China diplomatic relations and have an in-depth discussion with Xi on Germany-China relations and on important issues of mutual interest. He thanked Xi for the update on China’s development outlook.

He observed that in a complex and grave international landscape, Europe also faces unprecedented challenges. China is playing an important role on many global issues like climate change, biodiversity, COVID-19 response and food crisis. Germany wants to maintain communication and coordination with China to better safeguard regional and global peace and security.

Scholz said on issues where the two countries’ positions diverge, Germany is willing to exchange views with China to increase mutual understanding and trust, and stabilize, cement and grow bilateral ties. A multi-polar world is needed in which the role and influence of emerging countries can be taken seriously. Germany opposes bloc confrontation for which politicians should be responsible. Germany will play its role in furthering Europe-China relations.

The two leaders also exchanged views on the Ukraine crisis. Xi reaffirmed China’s support for Germany and Europe to play an important role in facilitating peace talks and to build a balanced, effective and sustainable security architecture in Europe. Under the current circumstances, the international community should support all efforts conducive to the peaceful settlement of the Ukraine crisis and call on relevant parties to remain rational and exercise restraint, start direct engagement as quickly as possible, and create conditions for the resumption of talks; oppose the use of or the threat to use nuclear weapons, advocate that nuclear weapons cannot be used and that nuclear wars must not be fought, and prevent a nuclear crisis in Eurasia; work together to keep global industrial and supply chains stable and forestall disruption to international cooperation in energy, food, finance and other areas and consequent damage to global economic recovery, especially the economic and fiscal stability of developing countries; and make joint efforts to tide civilians in areas affected by the crisis through the winter, and improve the humanitarian situation to avoid a humanitarian crisis on a bigger scale.

After the meeting, Xi held a banquet for Scholz at the Golden Hall of the Great Hall of the People.