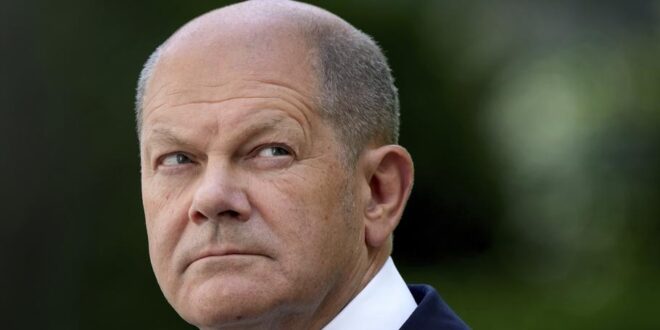 German Chancellor Olaf Scholz strongly criticized the Iranian government Saturday for its bloody crackdown on protests in the country said Germany stands “shoulder to shoulder with the Iranian people.”

Scholz said the ongoing protests sparked by the Sept. 16 death of 22-year-old Mahsa Amini following her detention by Iran’s morality police were no longer “merely a question of dress codes” but had evolved into a fight for freedom and justice.

The protests have grown into one of the largest sustained challenges to Iran’s theocracy since the chaotic months after its 1979 Islamic Revolution.

“We can barely begin to imagine how much courage this takes,” Scholz said in his weekly video address. “More than 300 killed, dozens of death sentences and more than 14,000 arrests. So far. Those who demonstrate against oppression in Iran risk their lives, and often also the lives of their loved ones – and face the prospect of torture and decades in prison.”

Hundreds of thousands of people in Germany with Iranian roots fear for their relatives and are “appalled and disgusted by what the Mullah regime is doing to the demonstrators,” the chancellor continued. “It is clear that the Iranian government is solely responsible for this spate of violence.”

Germany’s foreign minister on Friday rejected a complaint by her Iranian counterpart that she was taking an “interventionist” stance over protests in Iran and pushed back against his pledge of a “firm” response.

Earlier this month, Iranian Foreign Minister Hossein Amirabdollahian warned his German counterpart, Annalena Baerbock, that she was taking an “interventionist” stance over protests in Iran. Baerbock had made a speech to the German parliament in which she said Berlin would not let up in pursuing further sanctions against Tehran over the protest crackdown.

Responding to Amirabdollahian’s threat of consequences for Germany’s position, Scholz said, “What kind of government does it make you if you shoot at your own citizens? Those who act in such a way must expect us to push back.”