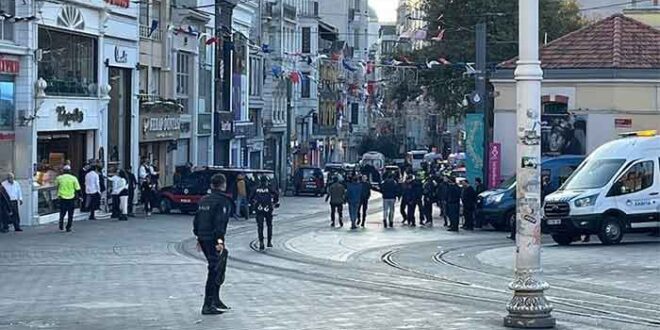 The Kurdistan Workers’ Party (PKK), a Turkish-Kurdish militia group, which is banned in Turkey as a terrorist organization, said on Monday that it was not involved in the Sunday explosion in Istanbul.

“We have nothing to do with this incident and it is well-known by the public that we would not target civilians directly or approve of actions directed at civilians,” PKK said in a statement published by the Kurdish Firat News Agency.

“We are a movement waging a righteous and legitimate struggle for freedom. We act based on a perspective that seeks to create a common, democratic, free and equal future with the society of Turkey. From this standpoint, we targeting the civilian population in any way are definitely out of the question.”

Earlier in the day, General Commander of the Kurdish units of the Syrian Democratic Forces (SDF), which is also considered a terror organization in Turkey, also declared noninvolvement in the terrorist attack in Istanbul.

Since the attack, Turkish authorities have detained 46 suspects so far after police carried out operations at 21 different locations after inspecting footage from 1,200 security cameras, a statement by the police said.

Moreover, the suspect admitted before Istanbul Police to have entered the country illegally from Syria’s Afrin. The suspect also admitted to having received training from the YPG while in Syria.

Turkish Interior Minister Suleyman Soylu did not mince his words when he addressed the press on Monday at the scene of the deadly terror bombing in Istanbul’s Istiklal Avenue that left at least six dead and 81 injured.

Soylu took exception to messages of condolence coming in from the U.S.

“It is essential to view the condolence message from America as the murderer being one of the first to arrive at the scene of the crime,” he said. “We will certainly give a clear answer to this message.”

Washington’s continued support for affiliates of the PKK terror group in the name of fighting Daesh in Syria has long been a point of concern for Ankara against its NATO ally, especially since the group has been declared a terrorist outfit by the US and Türkiye as well as the European Union.

While leaders associated with the PKK terror group have openly endorsed links with the YPG, Washington has turned a blind eye to their presence and illegal activities.

The PKK, or YPG, in northern Syria make up the majority and dominate U.S.-backed SDF.

Washington dubs SDF its key armed ally to fight Daesh, which controlled a vast swath of Syrian territory up till 2017. Türkiye says the SDF is merely a political front to hide the PKK/YPG presence among its ranks.

The U.S. denies political and military connections between the PKK and the YPG, backing the latter politically, financially and militarily.

The continuous U.S. support for the YPG has in the past strained ties between the two NATO allies.

“We have received the message, but we will not accept and are rejecting condolences from the U.S. embassy,” Interior Minister Suleyman Soylu told journalists.

Soylu’s rebuke came as he updated the media on the response by Turkish law enforcement following Sunday’s attack, which killed six people and left 81 others injured.

The Turkish official pointed the finger at Syria-based YPG militias as the people behind the bombing attack, claiming that “the terror plot came from Ayn al-Arab” – the district in northern Syria where the predominantly Kurdish city of Kobani is located.

Ankara considers the YPG to be part of the (PKK, a Turkish-Kurdish militia group that has waged a decades-old guerrilla war against the government. The U.S. has designated the PKK as a terrorist organization.

It helped Syrian Kurdish fighters by providing weapons, training and air support as part of Washington’s military involvement in Syria. The YPG fought against the forces of the terrorist group Islamic State (IS, formerly ISIS) with Washingtion’s assistance. The Turkish government complained that by bolstering the YPG, the U.S. was undermining Türkiye’s national security.

The discussion comes on the heels of a deadly bombing at one of Istanbul’s most crowded streets that left at least six dead and 81 injured.

The Turkish chief of general staff Yasar Guler has raised Sunday’s attack in Istanbul with his U.S. counterpart Mark Milley.

Guler had a phone call with Milley on Monday and discussed the deadly attack.

Post Views: 125
Previous Why China Will Play It Safe
Next Washington and the Destruction of ex-Yugoslavia