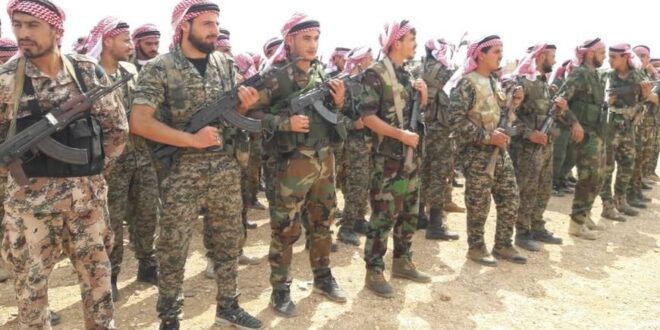 Why is Iran allying itself with Syrian tribal brigade in Aleppo?

A group of Iranian clerics visited the headquarters of the Baqir Brigade, Iran’s ally, in the city of Aleppo. The brigade has played a major role in curbing Russian influence in Aleppo in favor of Iran.

Over the past few days, Iranian clerics have visited the headquarters of the Baqir Brigade in Aleppo.

The Baqir Brigade is a tribal militia loyal to the Syrian government that was established in 2012 and whose members mainly belong to the Bakara tribe. The brigade includes several military battalions spread in the provinces of Aleppo and Deir ez-Zor. Hundreds of its newly joined members underwent training in Iran in special camps run by the Islamic Revolutionary Guard Corps (IRGC).

According to media sources who spoke to Al-Monitor, the Iranian clerics said during their meeting with the brigade’s leaders that their visit aimed to give religious lessons to the brigade’s members, under direct orders from the IRGC leadership.

The sources noted that the Iranian delegation assigned Faisal Allawi, a leader of the Baqir Brigade, with the task of opening a school and appointing teachers to teach children about the Shiite faith. Students will also benefit from financial rewards and scholarships in Shiite seminaries in Iran, the sources added.

He said, “The tribe traces its origins back to Imam Muhammad al-Baqir, one of the 12 Shiite imams.”

Issa noted, “Iran appointed Khaled al-Hussein — also of the Bakara tribe — as the leader of the brigade. Omar al-Hussein [who is one of the founding members of the brigade] was appointed as a member of the Syrian People’s Assembly [in previous elections].”

Issa explained that in light of “Russia’s war on Ukraine, the Baqir Brigade — with Iran’s support — has stepped forward to expand its presence and domination over Aleppo by establishing headquarters, and training and recruitment camps.”

He added, “The Baqir Brigade is the largest auxiliary force of the Syrian regime’s army in Aleppo, the Aleppo countryside, Deir ez-Zor and the Syrian Desert.”

The brigade’s secretary-general, Khaled al-Maree (in exclusive picture, showing the Baqir Brigade’s leaders offering the sword of Imam Ali to the Iranian delegation as a tribute), told Al-Monitor, “Our relationship with the Islamic Republic is very strong, and we share a strategic partnership in the war on terrorism and the Israeli enemy.”

He said, “In 2013, Iran began supporting [our war] against the Free Syrian Army factions by sending IRGC forces and military advisers to Syria to support us. The Baqir Brigade receives support from the Islamic Republic of Iran, and there are constant visits between the IRGC leadership and the brigade’s leaders in order to coordinate the mechanisms of work and rebuild the city of Aleppo with the support of Iran.”

Maree concluded, “The Iranian forces did a lot to regain control of the city of Aleppo and the countryside of Aleppo. We see that the Iranian role was greater than the Russian role in supporting us. Russia provided air support, while we, along with the IRGC, were the actors on the ground, and many of the brothers in the IRGC fell in defense of Aleppo. We are ready to stand by the Iranian brothers if they ask us to fight for their side wherever we will go.”