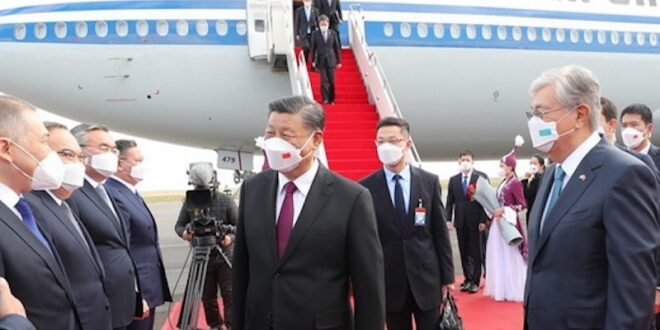 The People’s Republic of China (PRC) has finally initiated its highly anticipated railway project to Uzbekistan. On the sidelines of the Shanghai Cooperation Organization (SCO) summit held in September 2022, the official decision was made to begin actively working on the railway (The Diplomat, September 26). This fits into trends across Eurasia over recent months, which signal that Russia is quickly losing its grip over the South Caucasus and Central Asia due to its re-invasion of Ukraine. The Central Asian states are especially vulnerable to repercussions from Moscow’s disastrous war, with the region already reeling from the negative economic and political consequences.

A major downside for the Kremlin in losing regional influence is its weakening position as the primary security guarantor for its peripheral nations. The unstated “division of labor” with Beijing, in which Russia largely aids with stability via military and policing assistance and the PRC serves as the economic heavyweight, is quickly unraveling, as Moscow is no longer considered a responsible partner and ally.

As trust dissipates, so too does the willingness of the Central Asian states to rely on Russia. For instance, during the latest SCO summit, the escalation of the border conflict between Kyrgyzstan and Tajikistan was especially discomfiting for Russian President Vladimir Putin, as the warring sides are Collective Security Treaty Organization (CSTO) members. Moscow failed to intervene and was even tacitly accused by many in Bishkek of supporting Tajikistani President Emomali Rahmon (Radio Free Europe/Radio Liberty, October 17).

This led to Kyrgyzstan’s decision to abstain from the CSTO military exercises Indestructible Brotherhood-2022 and its refusal to take part in the exercises in Tajikistan. Additionally, Kyrgyzstani President Sadyr Japarov refused to travel to Russia for a summit of the Commonwealth of Independent States (CIS) (Apa.az, October 7).

Military drills are seen as a significant part of bilateral ties, especially within the CSTO. Refusal to take part is a clear hint of Moscow’s weakening prestige. In contrast, Beijing is actively working toward an expanded deployment of its private security companies across Central Asia.

The Kremlin is also experiencing troubles within the Eurasian Economic Union (EEU), another major Moscow-led grouping. Russia’s relations with Kazakhstan, a major ally within the organization, are in bad shape. Astana is reacting sensitively to Russian politicians’ nationalist rhetoric and suggestive territorial demands over the ethnically Russian-populated areas in northern Kazakhstan. This led one Russian official to even suggest Kazakhstan is purposefully hampering its participation within the EEU (Sputnik Armenia, October 31).

Cybersecurity cooperation is also becoming complicated, as Kazakhstan is increasingly limiting cooperation with the Russian side. As a result, the latter is seeking new partners (Kommersant, October 31). The PRC, the European Union and Turkey are the obvious alternatives.

Russia’s prestige, military and overall potential in its near abroad are flagging, pushing Beijing to seek a more proactive role in Central Asia. Beijing’s military cooperation with the Central Asian states has been steadily increasing over the past decade. Given the role Kazakhstan and the other Central Asian states play in the PRC’s foreign policy, as evidenced by President Xi Jingping’s first post-pandemic visit to Astana, Chinese cooperation with these regional states will only intensify (Fmprc.gov.cn, September 15).

At the same time, at least outwardly, Beijing will support coordination with Moscow and its intergovernmental organizations, such as the CSTO. An example of this could be seen in June 2022 when the PRC’s top legislator Li Zhanshu announced that Beijing planned to strengthen exchanges and cooperation with the CSTO (Xinhua, June 6). The PRC’s multilateral efforts are carefully programmed to alleviate anxiety in Moscow and the Central Asian states, but the trend is obvious: Beijing is gearing up for more engagement within the region, engulfing Central Asia into its own initiatives.

The Conference on Interaction and Confidence-Building Measures in Asia (CICA) is one such initiative, and Chinese Vice President Wang Qishan attended this year’s summit in Kazakhstan. Another is the “China+Central Asia” (C+C5) platform, which focuses on regional security and economic issues. This platform was established during the pandemic and presents Beijing with an opportunity to develop a holistic approach to Central Asia.

Russia’s weaknesses, exacerbated by its war against Ukraine, are also visible in its inability to block the development of regional infrastructure. The once-stalled China-Kyrgyzstan-Uzbekistan rail project, whose postponement was often attributed to Russian interference, has finally seen progress, with Beijing leading the way. In addition, the multibillion-dollar trade agreements recently signed by Xi with Uzbekistan and Kazakhstan have further dwarfed Russian efforts in the region.

The dilution of Moscow’s power is increasingly apparent. Geopolitical plurality trumps the Russian concept of “privileged sphere of influence.” Moreover, dependence on Beijing also kills Putin’s much venerated multipolar world concept. But more importantly, the Central Asian states also recognize the need to avoid overdependence on any one actor.

The search for a healthier balance of power is now in full swing. The PRC, and to a lesser degree Turkey, are viable alternatives for regional support. This sentiment was well reflected in the Tajikistani president’s speech at the meeting between the Central Asian states and Russia in on October 14, when he exhorted his Russian colleagues not only to pay greater attention to Central Asia as a region but also tacitly accused Moscow of disrespecting smaller states (Radio Free Europe/Radio Liberty, October 15).

While it is waning, Russia’s influence in Central Asia is not completely gone, and it is unlikely to fully dissipate. However, amid Moscow’s war against Ukraine, the trajectory of its influence is indicative of the Kremlin’s irreversible decline, as embodied by the faltering of the Russian-dominated multilateral initiatives, the emboldened foreign policies of the Central Asian states and greater competition with the PRC. Beijing has gone above and beyond to advance its own multilateral initiatives, which would institutionally limit Russia’s position. The developments on the ground reveal the fact that the PRC will chart its own course in the region—which at times runs contrary to the Kremlin’s interests.