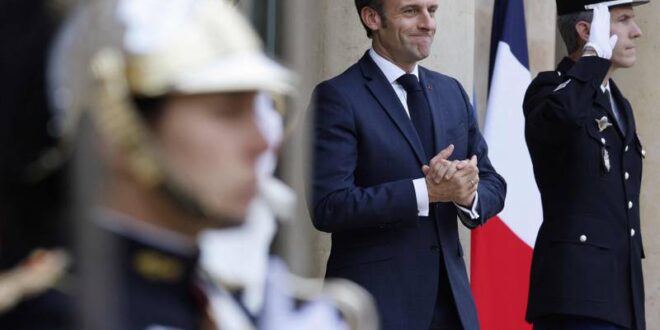 Can Emmanuel Macron relaunch France as a global security player?

Don’t let the war win is the mantra of members of Emmanuel Macron’s close circles. This means tackling a wide range of crisis situations that have been triggered by the conflict in Ukraine.

The French president went into this weekend with a significant foreign and defence policy agenda to both promote and defend, so that Paris can carve out a role as a significant player on the world stage as well as the leading force in Europe.

A 10-point plan for his armed forces was unveiled on the decks of a helicopter gunship carrier in Toulon on Wednesday. After the annual Armistice commemoration on Friday to mark the importance of the silencing of the guns, the French leader’s attention turned to Palais Brongniart in the north of the city for the fifth Paris Peace Forum.

Those closest to Mr Macron see this as a key juncture in Europe’s handling of the war in Ukraine. It is for the president a shift in diplomatic gear, after spending so long engaging with President Vladimir Putin and his Kyiv counterpart, to address and contain the resulting “multi-crisis”.

“If we can’t make peace in the immediate future, we must avoid letting the war gain ground by limiting its direct and indirect consequences, such as food insecurity, energy insecurity, the rising debt of developing countries, and the refugee disaster,” said Justin Vaisse, director general of the Paris Peace Forum. “The multi-crisis is the aggregation of difficulties: the war in Ukraine jeopardises food security, already endangered by global warming and the aftermath of the Covid pandemic.”

For the French president it has been a year of significant challenges, not least his own re-election to a second term. There was also a unique series of talks with Mr Putin both before and after the war was launched in late February.

In a fly-on-the wall documentary, it was revealed that Mr Macron was deeply engaged in first-name diplomacy with the parties but that his quest for a summit, not a conflict, was ultimately rebuffed.

Like many experts, the former diplomat Naureen Fink of the Soufan Centre in New York believes if the last two decades were defined by the terrorist attacks on the US in 2001, the next 20 will be shaped by the war in Ukraine.

Last week Mr Macron used the publication of an updated Strategic National Review and his keynote speech to define France in the new era. He spoke most importantly about the country’s nuclear deterrent as a contribution to the security of Europe, clarifying a more ambiguous statement that appeared to separate Ukraine out of this umbrella.

“Today even more than yesterday, the vital interests of France have a European dimension,” he said in Toulon. “Let us be careful not to forget that France does indeed have nuclear deterrence and let us sometimes be careful not to dramatise a few remarks.”

“What is happening in Ukraine is not just an illustration of the trends already at work, it is a massive acceleration,” he said. “This war also clarifies the state of the world in which we find ourselves, the weakening of norms and taboos, the intoxication of appetites. It qualifies this dangerous moment when the old balance is challenged and the new is not achieved.”

This served as a corrective as advised to the president by Francois Heisbourg, an analyst at the International Institute for Strategic Studies, who wrote: “The burden of guessing where our vital interests are lies with the aggressor.”

What Mr Macron wants to achieve is a change of mindset in France and Europe about the proximity of war to ordinary lives. The strategic review that Mr Macron took into the forum is a literal call to arms so that France and its partners are steeled to defend themselves.

Learning the implications of Ukraine is the primary task. One Elysee official involved in security and diplomacy cast the challenge in the run-up to 2030 in stark terms. ” It’s a change of mentality that must succeed in preparing people for war,” the official said.

What is disputed by French commentators is that this high-intensity capability can be created in less than a decade in France. “After all, we lived for years with the dividends of peace, but now we live in a world more increasingly dangerous, where state-to-state confrontations are increasingly present,” said Cedric Perrin, an opposition senator.

Bruno Tertrais, deputy director of the Foundation for Strategic Research, said the issue of the build-up was resources. “The French military today has almost all the capabilities but in numbers, in quantities, that is very much lower than what we could need for a high intensity engagement.”

There is no doubt that Mr Macron sees hard military power as much more important for the most essential reasons. “Europe, in fact, is no longer safe from missile and drone strikes and we must integrate this reality,” said Mr Macron, who also said the range of threats is not limited to countries. “Technology is now available to adversaries, who are not always states, the means to strike at distance.”

How to marry France’s new military framework with the diplomatic elements of a forum that brings speakers from around the world? Josep Borrell, the EU high representative for foreign affairs, tried to do just that in the session Riding out the multicrisis on Friday afternoon.

“The first thing to do in response to Ukraine is to help the countries that have suffered the most to tackle this crisis and we are doing that in many ways,” he said. “The second is to assume our geopolitical responsibilities and we have done that.

“For the first time the EU stepped in to provide military support for Ukraine. We are trying to achieve energy independence from Russia and we gave candidate status for Ukraine for European Union membership.

“And we want to be able to define a new security infrastructure in Europe.”

There was no getting way from how beleaguered Europe can feel on an international basis for the EU’s top diplomat.

As Mr Borrell acknowledged, there is a trap for Europe as it contends with the Ukraine situation. Other countries outside the bloc have to make choices between the climate crisis, the shortages of food, escalating prices of energy and the fertiliser issues.

“We cannot ask a person to be concerned with climate change 20 years down the line when that person is trying to figure out how to live for 20 days,” he said. “I would like to take this opportunity to say this clearly: European sanctions do not have an impact on either food or fertiliser.

“The challenge for all international organisations is to try to keep their head above water in tackling this emergency, but also to have a firm stance when the international rule of law and peace is threatened.”

The world has come to Paris this weekend and the lesson for their host Mr Macron came from a salutary set of pleas to ensure as France and Europe builds it defences, the global interest in stability should not be neglected.