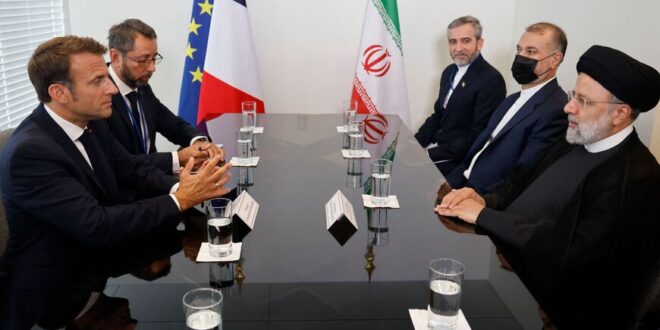 French President Emmanuel Macron admitted this week that amid ongoing protests in Iran and the mass detention of demonstrators, it would be very difficult for the West to make progress on talks for a new nuclear deal.

The French leadership is finding it harder and harder to separate the talks on a new nuclear deal with Iran from Iranian human rights violations. The French press reported yesterday and today on Iranian courts condemning protesters to capital punishment. Until a few weeks ago, the Elysée Palace was determined to keep the nuclear and the human rights issues apart, but this week, President Emmanuel Macron admitted it was no longer possible.

Speaking with French reporters after meeting with four Iranian women activists Nov. 14, Macron said the European Union will continue adopting sanctions against Iran in protest of human rights violations. “Something unprecedented is happening. The grandchildren of the revolution are carrying out a revolution and are devouring it,” said the French president. He was the first Western leader to use the term “revolution” regarding the ongoing demonstrations in Iran.

Still, Macron did not call for the designation of all of the Iran’s Revolutionary Guard Corps (IRGC) as a terrorist organization, an initiative promoted mainly by German politicians. “We are several who are pushing for targeted sanctions, especially on the [IRGC] and people in the regime,” said Macron, noting simply that as matters develop, blacklisting the group will be considered.

Macron then referred to the nuclear negotiations with Tehran, stating, “This revolution changes many things. I don’t think there will be new proposals.” At the same time, Macron said he intends to continue his dialogue with Tehran, pushing for a regional meeting by the end of the year in hope of finding a broader framework for nuclear talks.

Macron’s statements came on the backdrop of a new round of sanctions adopted by the European Union that day against Tehran over its brutal crackdown on demonstrators. They affected 29 Iranian individuals and three entities, asset freezes and travel bans.

Tensions between Paris and Tehran deteriorated even further in the past two days, as Iran claimed it had arrested French intelligence officers amid the protests. Yesterday the French Foreign Ministry denied “the false statements of the Iranian Minister of the Interior on our compatriots recently arrested in this country and recalls that it considers all these detentions to be arbitrary. As the [French foreign] minister indicated, we are aware of a total of seven French nationals who are now arbitrarily detained in Iran.”

France, Germany and the United Kingdom published a letter to the International Atomic Energy Agency (IAEA) Nov. 16 blaming Tehran for continuing enrichment activities and urging Iran to “immediately stop and reverse its nuclear escalation, allow for complete transparency with the IAEA by returning to full cooperation, and re-applying the Additional Protocol, as an important confidence-building step.”

French diplomats told Al-Monitor that now, after the midterm US elections, the clock is ticking. In a year, they said, when President Joe Biden begins a reelection campaign, it will be much more difficult for the West to reach compromises with Tehran in order to conclude a nuke deal, and Paris is well aware. If a new deal is ever to be reached, it will be in the coming months, or else chances would be slim to none.