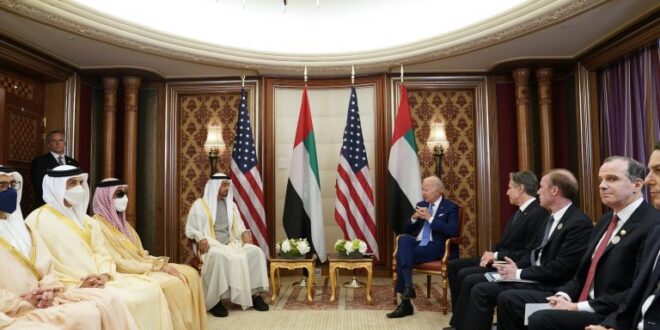 According to the Washington Post, several U.S. officials discussed with journalists a classified assessment that portrays a vast, multifaceted effort by the United Arab Emirates (UAE) to influence U.S. foreign policy.

The UAE funds various lobbying efforts, reports by influential U.S. think tanks, and recruitment of ex-U.S. officials to try to shift U.S. policy in ways favorable to it and allied Persian Gulf states.

The UAE’s increasingly close relations with Israel and its strategic partnership with the United States will mitigate the report’s damage to the UAE’s reputation in Washington.

According to a November 12 Washington Post report, the U.S. intelligence community’s overarching National Intelligence Council (NIC) has compiled a classified report detailing extensive efforts by the UAE to try to shift U.S. foreign policy in ways favorable to it. According to the Post report, several U.S. officials who have read the NIC report discussed its findings (on the condition of anonymity), suggesting that the Post story results from an intentional leak. The NIC report on the UAE is somewhat contrary to tradition insofar as it focuses on the influence operations of a key U.S. security partner rather than an adversary such as Russia, China, or Iran. These adversaries have been the subject of numerous reported U.S. assessments in the past. Yet, much of what was reported about the NIC study appears to track with open and public information gleaned from U.S. prosecutions, Justice Department data, and watchdog reports published in the past. The Post report did not allege that the UAE has conducted specific operations to influence U.S. elections. Still, the NIC report is unique in that it reportedly examined interactions involving U.S. officials – given the intelligence community’s mandate to focus on foreign threats. To that extent, the report might be a warning to former U.S. officials, former U.S. military leaders, think-tank experts, and other Americans to proceed with caution when entering any financial or contractual relationships with the UAE or other governments that use their vast disposable wealth to fund similar influence tactics.

As described to the Post, the report, as well as other data, portrays a complex and multifaceted effort by the UAE to build a large network of political allies in the United States to influence U.S. officials and public opinion. According to Justice Department records, the UAE has spent more than $150 million on lobbyists since 2016. It has donated hundreds of millions of dollars more to U.S. universities and think tanks, presumably with the implicit understanding that the resulting policy papers will yield recommendations favorable to UAE interests. One of the more aggressive UAE efforts reportedly included hiring three former U.S. intelligence and military officials to help the UAE surveil dissidents, politicians, journalists, and U.S. companies. In public legal filings, U.S. prosecutors said the men helped the UAE break into computers in the United States and other countries. Last year, all three admitted in court to providing sophisticated hacking technology to the UAE. Last month, the Post reported that, over the past seven years, 280 retired U.S. service members have worked as highly-paid military contractors and consultants for the UAE, more than any other country. Suggesting that U.S. officials are increasingly seeking to prosecute U.S. citizens who cooperate with foreign influence efforts, Thomas Barrack, a longtime adviser to former president Donald Trump, was accused of working as an agent of the UAE and lying to federal investigators about it. U.S. prosecutors accused Barrack of exploiting his access to Trump to benefit the UAE and working a secret back channel for communications that involved passing sensitive information to Emirati officials. However, he was acquitted in November – demonstrating the degree to which U.S. laws seeking to curb foreign influence have significant loopholes or, at the very least, ambiguities. Prosecutors failed to convince a jury that his influence-peddling gave rise to crimes.

A key question about the NIC report is why it focuses on the UAE – a close ally that hosts 5,000 U.S. air and naval forces at Al Dhafra Air base and Jebel Ali port. It is a large buyer of U.S. arms that is considered pivotal to U.S. efforts to project power in the region against Iran, the Islamic State organization, Al Qaeda, and other threats. In addition, press and watchdog reports have noted the use of similar tactics by such well-funded U.S. allies as Saudi Arabia, Israel, Taiwan, and other governments. And, in 2020, the UAE agreed to a normalization of relations with Israel – a relationship that has expanded since and significantly enhanced the U.S. position in the region – seemingly adding to the U.S. constituency that supports close U.S. relations with the UAE.

The NIC report about the UAE can be interpreted as an effort to criticize the UAE’s leader, Mohammad bin Zayed Al Nahyan (MBZ) and, indirectly and perhaps more pointedly, to undermine MBZ’s close ally, Saudi Crown Prince Mohammad bin Salman (MBS). The two countries have conspired closely on several regional issues that U.S. officials considered contrary to U.S. interests, including the war in Yemen against the Houthis, the 2017 isolation of Qatar, and, most recently, an October decision by OPEC and non-OPEC to reduce the production of crude oil. U.S. officials viewed the oil production decision as a direct contradiction of an understanding with MBS to delay any oil production cut. MBS’ reputation in Washington has never recovered from his role in the October 2018 killing of Saudi dissident Jamal Khashoggi. Yet, despite MBZ’s close cooperation with MBS, the UAE still has a sufficient reservoir of support – based on its relations with Israel and its strategic partnership with U.S. forces in the Gulf – to avoid major damage to the UAE’s standing in Washington. However, there will certainly be growing scrutiny of former U.S. officials, universities, think tanks, and other Americans who decide to cooperate with the UAE’s influence operations.