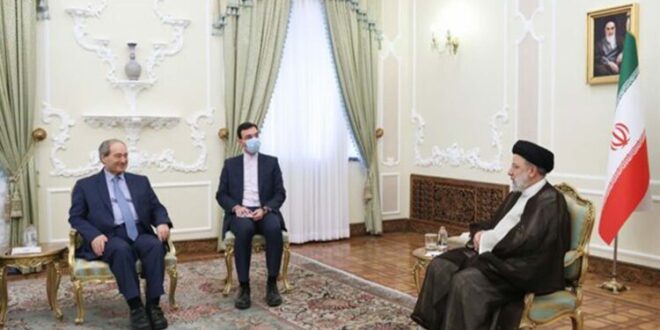 During a meeting with the Syrian Foreign Minister held on Wednesday in Tehran, Iranian President Ebrahim Raisi stressed the need to fully implement agreements between Iran and Syria.

Raisi said that Syria, following several years of crisis, is in a position today that enables it to enter its strategic relations with Iran into new fields by focusing on economic cooperation, according to The Islamic Republic News Agency.

The Iranian president stressed his country’s continuous support to Syria.

He added that Syria’s safety, sovereignty and role in the region are important and vital.

During the meeting, the Iranian president highlighted the need to enhance and develop bilateral relations between the two allied countries in different fields.

In a joint press conference between Mekdad and his Iranian counterpart Hossein Amir, the Syrian Foreign Minister said his visit to Iran came to go ahead for further consultations between Syria and Iran in various areas of cooperation.

“We support a multipolar world where countries have freedom and democracy, not a world dominated by the US and Westerners,” the Syrian foreign minister added in his remarks.