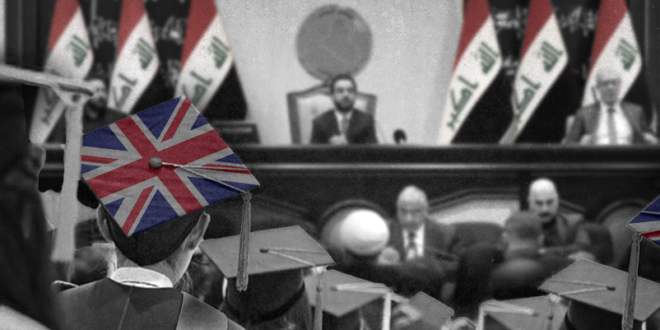 Made in Britain: How London handpicks Iraqi leaders

Throughout the 20th century, it was frequently said by residents of West Asia, “lift up a mullah’s beard, and you’ll see the words ‘Made in England’ written underneath it.”

Such cynicism is understandable, given Britain’s history of covertly co-opting Imams and sheikhs to further its malign interests across the region.

Yet explosive leaked files reviewed by The Cradle show that this time-tested clandestine strategy hasn’t waned as the traditional role of religious teachers in West Asia is increasingly supplanted, or at least challenged, by politicians ostensibly elected by democratic vote.

Rather, it has evolved and been asserted in more modern forms, which are just as insidious, but may perhaps be even more effective in ensuring West Asian leaders at every level can be reliably depended upon to do London’s bidding.

The documents reviewed by The Cradle relate to a Foreign Office project in Baghdad, dubbed “Youth Political Leadership, “set to run for at least a year from August 2016. An accompanying “statement of requirements” not for public consumption laid out its objectives in stark detail. In brief, London sought to “identify young Iraqis…who will join the political establishment,” and train them in “values; representation; and political skills.”

This schooling would “ideally” be complete by Spring 2017, so “successful graduates” could “participate as candidates in the 2017 (or 2018, circumstances depending) local elections.” The desired end goal was that Iraq’s parliament and government alike would be “replenished with a professionalised and young class of political figures” who could be depended upon to serve London’s interests.

“The influx of these young Iraqis,” the statement explained, stood to “benefit” Britain, in particular by facilitating the spook-infested National Security Council’s strategy for Baghdad.

Construction and management of the training program was outsourced to private contractors who were tasked with putting together a “comprehensive plan” for “gender diverse” Iraqis aged 27 or below with “a realistic prospect of entering the political sphere,” including a dedicated “curriculum” that would inculcate “professional ethics” and “hard political skills” in students, to ensure they could optimally “influence” voters.

Trainees were to be subject to intensive “monitoring and assessment” both during and after the course, with top performers whisked to London for a state-funded “study tour,” where they would be assigned “individual mentors” to “help support their career ambitions.”

Subsequently, a “graduate network” would be operated on- and offline in cooperation with the British embassy in Baghdad, to ensure “regular contact” between students and the Foreign Office – and thus MI6 – “through their political careers.”

Prospective candidates would be rigorously vetted before enrolment to ensure they had “an appropriate vision for Iraq,” with a “realistic” prospect of, and plan for, entering the political sphere upon graduation, such as “being chosen as a parliamentary advisor or selected to run as a provincial council member.”

These individuals would then be rigorously taught the Foreign Office’s approved curriculum, so as to instill them with “the right [emphasis added] technical knowledge, skills, attitudes and behaviours” in candidates.

“Practical training on how to function as a political representative,” such as “campaign work (e.g. canvassing, usage of social media),” and “the skills needed to collaboratively function as a member of the legislature,” would also be provided.

London’s call was answered by Adam Smith International (ASI). The company clearly grasped the urgency of the project. In detailed submissions to the Foreign Office, it noted that “recent events clearly indicate there is pressing need to address the failure of the Iraqi political establishment to provide an effective government,” making repeated reference to large-scale protests in Baghdad’s historic Tahrir Square, which occurred in July 2016.

Those incendiary scenes were part of several wide-ranging upheavals that unfolded across Iraq that year, spurred by anger over high-level corruption, and never-ending government gridlock.

Incidentally, these were themselves by-products of the byzantine political structure imposed upon Baghdad in the wake of the illegal US-led invasion of Iraq in 2003. Western occupation forces enforced strict ethnic, sectarian, and party quotas on every office of state, ensuring perpetual division, inertia, and gridlock – essentially an inability to address basic public needs.

In the ensuing power vacuum, sectarian groups rose to the fore as the primary means by which average citizens could pressure parliament into implementing vital reforms. This development was no doubt extremely unwelcome to London – after all, many of these movements were Shia-led, raising the obvious prospect of neighboring Iran’s influence increasing considerably within the country.

This concern is reflected in ASI’s submissions. In bemoaning “the absence of a functioning government,” and emphasizing the resultant need to identify and groom future leaders promptly, the company noted firebrand Shia cleric Muqtada al-Sadr was a leading figure in the 2016 protest movement.

“Unless steps are taken to provide avenues for the next generation of Iraqis to enter the legislature, the existing political cadres will continue to dominate the scene, leading to rising frustration and increasing social unrest,” ASI cautioned. “Practical assistance and continuing career support has the potential to stymy the rising tide of frustration among the youth of Iraq in the short term.”

In a perverse irony, ASI purportedly played a pivotal role in shaping Iraq’s unworkable political system from its initial stages, enforcing the precise construction which the Foreign Office became resolved to shatter.

In sections of the leaked files outlining its experience of working in Iraq, the company noted that since 2004, it had on behalf of the British government “[provided] assistance to centre of government institutions in Iraq,” including “[developing] key parts of the machinery of government.”

Its in-country team was even said to have “worked closely” with representatives of the Prime Minister’s and Deputy Prime Minister’s offices, granting them a “detailed understanding of the functioning of the Iraqi political system.”

“ASI will leverage the contacts and experience from this project to help facilitate the outreach among political parties,” the contractor pledged. Little did those who ASI previously installed and shored up in office know, that in assisting their Foreign Office friends identify recruits for the leadership training program, they were signing their own political death warrants.

Evidently, the assorted individuals and organizations serving British interests in West Asia at any given time are highly expendable – and should the governance structure they’re drafted to run on London’s behalf perform poorly, or become difficult to effectively control, another must be constructed in its place, filled with all-new representatives in order to create the bogus impression of “change.”

All along, the Foreign Office’s hand in steering a government’s composition and policies, and picking its public faces, will remain hidden, obscured by layer-upon-layer of private contractors, and lofty rhetoric about progress and democracy.

The leaked files exposed here represent a particularly candid insight into how Britain pursues its imperial ambitions in the modern day – but just one. The Cradle has previously exposed a similar connivance in Lebanon, wherein London covertly recruited “agents of change” from among the country’s youth, teaching them how to “maximise their impact” and boost their “name recognition and credibility,” in order to eventually elevate them to parliament.

It stands to reason that Baghdad and Beirut are far from alone in this regard. As such, it behooves all residents of West Asia to ask themselves for whom their elected representatives are truly working, and what interests they ultimately serve.