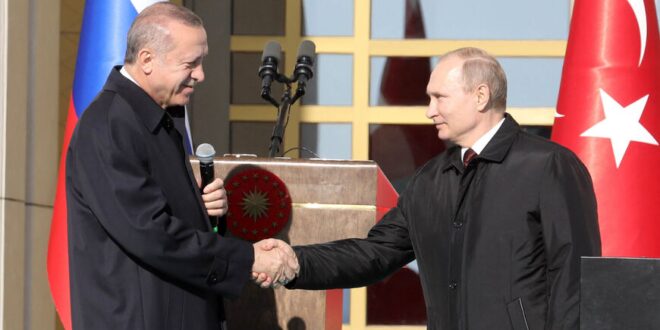 Some experts are warning that Turkey’s first nuclear power plant, which is being built by Russia’s Rosatom, might become a tool to advance Russian interests in the region.

A potential security threat has emerged for NATO and Europe at large: the construction of Turkey’s first nuclear plant. Experts say the project by Russia and Turkey could allow Moscow to establish a commercial port in Turkey’s Mediterranean province of Mersin.

The plant, which will be built and financed by a subsidiary of Russia’s nuclear energy firm Rosatom, is set to have its first reactor operational by May 2023 under the Turkish-Russian agreement signed in July 2022 between Rosatom subsidiary Akkuyu Nukleer and the Turkish firm TSM Enerji, which is owned by three Russia-based companies.

Some 200 kilometers (120 miles) from Cyprus and NATO’s Kurecik early-warning radar station and also near the Syrian border, the Akkuyu Nuclear Power Plant is in a highly strategic location that may prove to be an important regional asset for the Kremlin. The Russian navy already operates a large naval base in Tartus, Syria, some 250 kilometers (155 miles) from Mersin.

Billing itself as the “biggest project in the history of Russian-Turkish relations,” the nuclear power plant is planned to house four generating reactor units, which is expected to produce 10% of Turkey’s electricity needs by 2026 and create many job opportunities. While an original agreement for the construction was signed in 2010 between Akkuyu Nukleer and the Turkish firm IC Ictas, it was later on terminated and a new one was signed over the summer for TSM to undertake the remaining building work. The estimated $20 billion plant ultimately seems to favor Russia, as it was funded almost entirely by Rosatom and provides its entities with a majority stake. While a 2018 deal was reportedly concluded in which Moscow would retain 51% and sell 49% stakes to Turkish firms, later reports claimed this arrangement collapsed and that Russian entities now possess 99.2% of the shares. The site is also Rosatom’s first application of a build-own-operate model in which Russia is in charge of its design, construction, maintenance, operation, training of Turkish personnel and eventual dismantling.

Several elements linked to the Akkuyu plant have raised national and international concerns. These have partly stemmed from some of the reported clauses in the initial agreement that could prove to be problematic in the current international climate. They include allowing for the development and construction of all necessary supportive infrastructure without any limitations, permitting technology transfers and the exchange of information between parties in the field of nuclear installations and activities and provision of nuclear and non-nuclear systems, equipment and material for the plant’s construction.

According to a Turkish defense expert who wished not to disclose his identity, while in the 2010 deal, the potential port was to be used only for the needs of the nuclear facility, recent amendments “paved the way for” the possible facility to be used as a commercial dock by Russia.

“Depending on Russian-Turkish relations there is nothing to prevent Russian ships from being used in the region for purposes such as logistical supplies,” the source told Al-Monitor.

With unconfirmed reports that Russia has been misusing the Turkish straits for commercial purposes, using civilian cargo vessels to transport materials for its military operations in Syria and Ukraine, there is a risk that the Akkuyu infrastructure could be used in a similar way to advance Russian interests in the region.

Back in 2015, at the peak of the Russian offensive in Syria, it had been uncovered that Moscow was buying nearly obsolete ships from Turkish firms, rebranding them under new names and using them to transport food, ammunition, fuel and small arms to its soldiers. Russia and Turkey support rival parties in the Syrian civil war, but have been closely coordinating on a series of issues on the ground under deals between the two countries.

When asked how likely it would be for Russia to use the potential port for commercial purposes to avoid bans, Dmitry Gorenburg, a senior research scientist at the Center for Naval Analyses, said, “That could certainly happen as Russia is working hard on ways to circumvent sanctions.”

However, it’s improbable the facility could be exploited for military purposes, Gorenburg said. “Although Russia has always aspired to have bases in the Mediterranean, there isn’t a strong need from a logistics point of view to have two bases so close together. It would not be as advantageous as if it had one in a different part of the region, and Tartus provides its navy with the access it needs in terms of replenishment facilities.”

He added that it would be inconceivable for Turkey to allow Russia to use the port for military purposes and if such a thing were to happen, “it would consist of a break with NATO and signal that Turkey is on board with it.”

The Turkish expert, meanwhile, said that a port, even if not a naval base per se, “would still provide Russia with one more asset and capability in the region” and lessen “some of its dependency on Syria.”

Turkey’s political opposition has aired other concerns over the plant. Most recently, opposition lawmaker Ali Mahir Basarir questioned the abnormal amount of land given to Russia for the project at 10 times that allotted to similar plants operating elsewhere.

High levels of movement between the Turkish port of Mersin and Russia’s Novorossiysk have also drawn attention amid concerns. There were on average 52 ships arriving daily in Mersin, largely offshore supply vessels, containers as well as dry break bulk, according to Marine Traffic, between Oct. 31-Nov. 13.

In August 2022, Delo Group — the largest Russian private holdings for freight forwarding owned at 49% by Rosatom — announced it would operate fortnightly service between the two ports, with southbound loads including cargo for the plant’s construction and return freight of Turkish industrial products.

Some Turkish media reports have also claimed that the Mersin port has become a transit hub for Russian imports where once goods arrive, they are loaded onto ships of Turkish shipping firms heading to Russia without being declared as imports in Turkey.

Over the coming months, greater attention will likely be directed to monitoring the plant’s development via Turkey-NATO collaboration efforts to ensure Russia does not overstep or misuse its powers. Events in Ukraine have shown how the Kremlin can effectively use nuclear power plants as a weapon during conflicts to threaten or intimidate its opponents.

Post Views: 40
Previous Turkey strikes near US base in Syria after Pentagon calls for de-escalation
Next Sisi, Erdogan meet, pledge new era of Egypt-Turkey relations