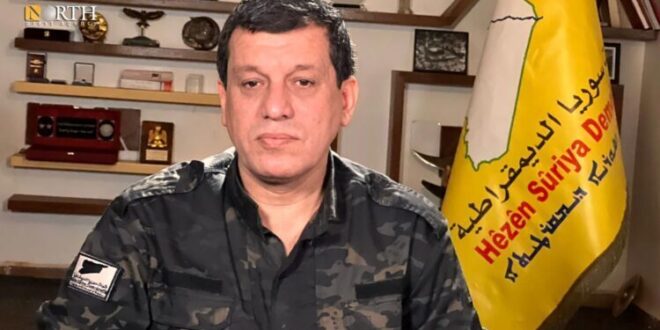 The regime is only willing to recognize some of the cultural rights of Kurds in Syria, according to Shaam Network.

On Monday, Kurdish sources reported the Assad regime’s refusal to recognize the Autonomous Administration during meetings in Damascus between the two parties under Russian auspices.

The sources said that the regime had expressed its readiness to recognize some of the cultural rights of Kurds in Syria in exchange for the SDF and the Autonomous Administration abandoning their autonomy, indicating that the regime is not ready to make any concessions so far.

The Kurdish source, who is close to the Democratic Union Party (PYD), said, according to the Basnews website: “The Syrian regime categorically refused to recognize the SDF’s existence within the regime’s army” during the meetings that took place in Damascus and were headed by Badran Jia Kurd, co-head of the Department of Foreign Relations in the Autonomous Administration.

The source stressed that “the regime is ready to deal with the SDF as a local affiliate group in northeastern Syria, without recognizing it as a military force with its own right.” This position acknowledged the great key objective relating to the SDF, which is to avoid Turkish pressure and threats to launch military operations targeting areas of SDF control in northern Syria.

Mazloum Abdi, commander of the SDF militia, said in an interview with Russia Today that the regime forces are interested in protecting the Syrian border. Abdi called on the regime to take the decision to stand with the SDF in the face of a possible Turkish attack.

Abdi explained that the SDF’s forces stand behind the border with a Russian guarantee, while regime forces are present on the border with Turkey and inside some cities. According to Abdi, it is likely that Turkey has not yet received the green light to start any ground military operation; he indicated, however, that the SDF is reviewing all Turkish threats seriously.

Kurdish sources have previously revealed that the SDF rejected a Russian proposal to hand over the Syrian border areas with Turkey to Assad’s forces and withdraw 30 km from the border with Turkey during a meeting that took place at Qamishli airport on Friday.