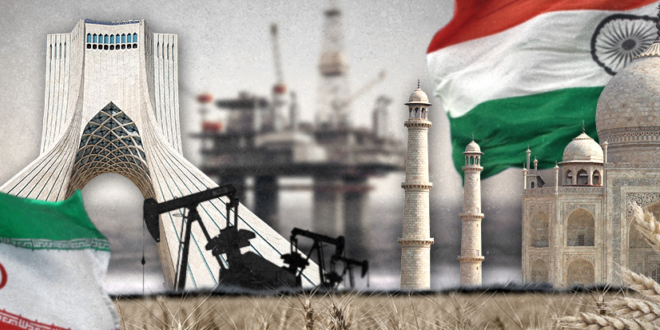 Following a drop in trade brought on by US sanctions, New Delhi and Tehran – boosted by their mutual strong relations with Moscow – are set to revamp ties in a new era of Eurasian multipolarity.

“Not a choice, but a necessity.” That’s how Iran’s Deputy Foreign Minister Ali Bagheri Kani stressed the importance of closer strategic and economic ties between Tehran and New Delhi during his visit to India in November.

Kani had a message for Prime Minister Narendra Modi from Tehran – strategic synergy is a win-win proposition for the two sides amid the shifting geopolitical and geo-economic landscape in the wake of the Ukraine war and the new world order.

Before the Trump administration reinstated sanctions on Iran in 2018, Iranian oil comprised nearly 11 percent of India’s total oil basket. However, New Delhi buckled under US pressure and stopped importing oil from Tehran in a move that hampered their cooperation in other strategic areas.

Three years down the line, amid rapidly changing geopolitical power dynamics and the end of “the era of the unipolar world,” as announced by Russian President Vladimir Putin in June, India has become keen on recalibrating its ties with Iran, a traditional ally, in the midst of an energy crisis gripping the world.

It is worth noting that Russia became the biggest oil supplier to India in October, supplying 935,556 barrels of crude oil per day, according to energy cargo tracker Vortexa, making up for 22 percent of the energy-dependent country’s total crude imports, ahead of Iraq’s 20.5 percent and Saudi Arabia’s 16 percent.

Iran as an alternative energy supplier

Faced with a burgeoning demand for oil and gas amid the global energy crisis and recent oil cuts by the OPEC+, India now looks poised to resume oil imports from Iran, defying US sanctions, The Cradle learned from sources in Tehran and New Delhi.

Interestingly, India’s petroleum minister Hardeep Puri hinted at it during his visit to Washington in October, saying New Delhi will buy oil from wherever it has to. Russia, as we know, is already shipping oil to India, despite strong US pressures.

Talks are currently underway between India and Venezuela, especially with the US easing oil-related sanctions against Caracas. This, by extension, has opened a window of opportunity for India and Iran to revive their energy trade. The good news is that both sides look interested.

Iran has already expressed its readiness to resume energy trade with India. Last month, newly-appointed Iranian ambassador to New Delhi, Iraj Elahi, announced that Iran is willing to provide low-cost crude oil to India to ensure the country’s energy security, something top Indian officials have in recent months cited as the government’s priority.

In 2018-2019, India purchased $12.11 billion worth of crude oil from Iran, which plummeted to zero in May 2019 after the significant reduction exemption (SRE) period ended.

Likewise, trade between the two countries dropped from $17.3 billion in 2018-2019 to $4.77 billion in 2019-2020. Although it has ultimately failed to achieve its objectives, Washington’s “maximum pressure” campaign had a negative impact on India-Iran relations.

However, ties have since markedly improved, as evidenced by Bagheri Kani telling the Indian press that the Islamic Republic is ready to meet the country’s growing energy needs, while India can in turn contribute to Iran’s food security as a major food producer.

This, he asserted, would help in boosting the process of multilateralism in the international system, which essentially means the death of US unilateralism more than three decades after the end of the Cold War and the collapse of the former Soviet Union that paved the way for the era of the unipolar world.

Suhasini Haidar, diplomatic affairs editor at The Hindu and a leading Indian analyst, termed Bagheri Kani’s visit to India as “significant,” saying it “shows a commitment to India-Iran ties by both governments despite geopolitical divides in the world on issues like the Ukraine war.”

Penalized by US sanctions

“It was irrational of the Modi government to have canceled India’s imports of Iranian oil under threat from the Trump administration, and it would make sense if they decided to restore the oil trade between the two countries,” she told The Cradle.

Haidar said it remains to be seen if the Modi government will be willing to resume oil imports from Iran, “despite several signals that both sides are exploring their options,” especially after the latest sanctions on an Indian company transporting Iranian oil.

Mumbai-based Tibalaji Petrochem Private Limited was sanctioned in late September for shipping Iranian petrochemical products to China. It was the first time an Indian company was sanctioned by the US for dealing with Iran.

In his meeting with his Indian counterpart Vinay Mohan Kwatra, Bagheri Kani pointed to the “necessity” of regional cooperation between the two countries, which he said would “take away the opportunity from foreigners to exploit the lack of cooperation.”

The sentiments were mutual as India’s foreign ministry spokesman, in a statement following Bagger Kani’s meeting with Kwatra, said the two officials “discussed bilateral relations, including the development of Chabahar Port” and “regional and international issues of mutual interest.”

Time to shore up ties

According to observers, the time is now ripe for the two sides to shore up bilateral ties and multilateral cooperation, with Tehran set to become a full member of the Shanghai Cooperation Organization (SCO) as well as the BRICS group, given its close ties with Russia and China.

Notwithstanding existing challenges, Iran and India share mutual interests in trade and connectivity. Iran’s full SCO membership could prompt the two sides to focus more on connectivity projects like the Chabahar Port, which links with the International North-South Transport Corridor (INSTC), the multi-mode network of ships, rail and roads for moving freight between India and Iran, among other countries.

“India and Iran have important trade needs, including in wheat pulses and commodities, as well as oil reserves. And the connectivity engagement is very important for India through Chabahar and through the INSTC,” Haidar explained.

Importantly, in recent years, Chabahar Port in Iran’s southeastern Sistan-Baluchestan province has emerged as a key area of cooperation between Tehran and New Delhi, which will provide India access to Afghanistan and Central Asia through Iran, ending its reliance on arch-rival Pakistan.

Rezaul Hasan Laskar, the foreign affairs editor at Hindustan Times, says the strategic port has “become more important following its growing use” but that “it needs to be connected to Iran’s railway network.”

While the first section of the Zahedan-Chabahar railway line is nearing completion, official sources in Tehran said the agreement between the two sides to construct the 628-kilometer (390 miles) railway line had faced “serious impediments” due to New Delhi’s reluctance to start work fearing US sanctions.

“Despite India’s close ties with the US and Israel, its decision to build strategic ties with Iran, and Iran’s according special projects to India like Chabahar Port despite its ties with China are a constant reminder of this special relationship,” Haidar told The Cradle.

Joint cooperation with Beijing and Moscow

Sources in Tehran and New Delhi said the use of rupee-rial trade was also “seriously considered” during Bagheri Kani’s New Delhi visit, with both sides agreeing that a banking mechanism that is not tied to the west is key to strengthening the process of multilateralism, and paving the way for the resumption of trade.

Laskar of Hindustan Times confirmed that the senior Iranian diplomat “reiterated Iran’s offer to resume oil supplies and raised the issue of trade in national currencies.”

The changing geopolitical landscape in the wake of growing anti-western mechanisms, including SCO and BRICS, led by China and Russia, is also likely to propel increased cooperation between Tehran and New Delhi.

Laskar, however, believes that the SCO has not been a particularly crucial grouping for India in recent years, “largely because of the tensions with China,” adding that India’s biggest concern about the expansion of BRICS is that “it shouldn’t become a China-centric grouping,” underlying Sino-India tensions.

Meanwhile, Russia remains a common ally of India and Iran, which is evident in Moscow and New Delhi looking to ramp up trade via Tehran along the INSTC – the strategic route that has assumed tremendous significance since the start of the Ukraine war.

The decision to boost INSTC trade, according to reports in Indian media, was high on the agenda during Bagheri Kani’s India visit, as Russia now looks set to invest in the Chabahar Port. According to sources, the war in Ukraine also figured prominently in Bagheri Kani’s talks with Indian officials. Both sides agreed on maintaining a “neutral stance” on the war and increased engagement with Moscow.

“Russia is the new game-changer in the region, especially after the realignment of power centers, and that is good news for India-Iran ties,” an Iranian diplomat stationed in South Asia told The Cradle.