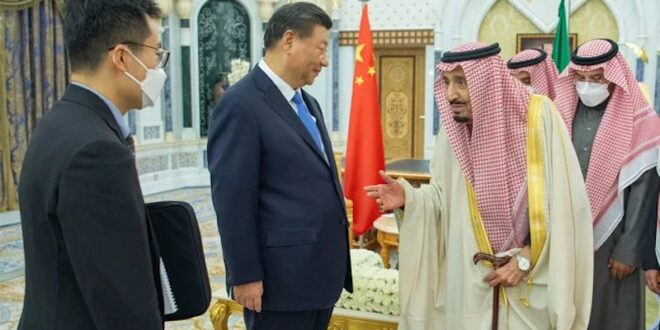 China’s Shifting Persian Gulf Policy: Is It Favoring The GCC Over Iran? – Analysis

Chinese leader Xi Jinping’s visit to Saudi Arabia on 7 December 2022 has marked a turning point in Beijing’s foreign policy towards the Persian Gulf states. This three-day trip included three summits: One with President Xi and the Saudi Crown Prince on behalf of King Salman; a second between China and the Gulf Cooperation Council (GCC) states; and a third among China and the Arab League—a regional organisation with 22 member states. As expected, Xi’s trip to Riyadh was motivated primarily by energy interest amidst the ongoing fluctuation in global energy markets after the Russia-Ukraine war.

Saudi Arabia has been the largest crude oil supplier to China since 2020, and Beijing plans to increase the import of oil and liquefied natural gas (LNG) from the region. Apart from 34 agreements worth US $30 billion signed in the infrastructure, information technology, and green energy sectors, Beijing and Riyadh are set to expand their strategic partnership at a time when the two states’ relations with the United States (US) are increasingly frayed. During his summit with the GCC states, President Xi noted his trip heralded a “new era” in China-Arab partnership. In the first China-GCC summit, all sides also agreed to adopt a five-year joint action plan for strategic dialogue and to develop their partnership in various security and economic issues, including the Iran nuclear programme and regional issues.

What made the China-GCC summit unexpected for Tehran is the anti-Iran statementthat Xi signed with the GCC states. The joint statements released during the first China-GCC summit have left statesmen in Tehran wondering if there is a shift in Beijing’s strategy towards the Gulf region, especially in a situation where the US is stepping away from its security commitments there. This unexpected statement referred to Iran as a ‘supporter of regional terrorist groups’, ‘proliferator of drones and ballistic missiles’, and ‘destabiliser of regional security’. It further called on Iran to cooperate with the International Atomic Energy Agency (IAEA), adhere to the Nonproliferation of Nuclear Weapons treaty, not interfere in the internal affairs of neighboring countries, and reach a solution with the United Arab Emirates (UAE) on the issue of the three Iranian islands through bilateral negotiations. In response, Tehran immediately summoned China’s envoy over a joint statement with the GCC, reaffirming that the three islands of Abu Musa and Greater and Lesser Tunbs located in the Persian Gulf are inseparable and eternal parts of Iran.

It seems that China’s long-standing neutral stance towards the Persian Gulf region is shifting. Taking the GCC’s side against Iran would increasingly challenge China’s balancing act in the Persian Gulf. Although it is not an easy task to argue whether China is favouring the GCC over Iran in the Persian Gulf, there are multi-level and multidimensional drivers that unfold the incentives behind China’s recent move in switching allegiance to the GCC Arab monarchies.

First, the GCC’s stance towards China has shifted significantly. The China-GCC states partnership is evolving within the shifting global and regional context. The GCC leaders have long manifested their rising concerns over the security consequences of the US disengagement from the region. The GCC expects China to support its security initiatives in pushing back Iran’s regional influence and deterring its military activities. For China, the most difficult part of deepening strategic ties with the GCC is managing its relations with Iran. However, As Iran’s levers in the regional balance of power weaken and its tension with the West intensifies, China moves less cautiously towards strengthening its partnership with Tehran’s rivals in the region.

Moreover, the young Arab monarchies find themselves in an unprecedented position to assert their strategic autonomy. By deepening strategic partnership with China, the Arab monarchies aim to send a message to Washington that they have alternative great power options. One of Riyadh’s motivations in expanding military relations with China has been to provide more options for itself in response to the Western pressures and arms embargos against Saudi Arabia in the Yemen war. Although China’s increasing engagement in the Persian Gulf is not intended to replace the US, at least in the mid-term, the Arab states have growing tendencies to involve China in regional affairs.

Second, increasing levels of engagement in the Persian Gulf demonstrate that China seeks to play a larger role in shaping the prospect of regional arrangements. Although ordering the chaotic Middle East is not a Chinese priority, Beijing came to the conclusion that China’s supposedly active role in this region could provide effective levers to balance the US’s pivot to Asia policy. Accordingly, in recent years, China’s Persian Gulf policy appears to rest on bringing America’s strategic partners closer to itself, and avoiding entanglements in the regional disputes where the US engaged, more specifically the Iran case. Moreover, the more influence China can exert on the GCC’s economic sectors, the more power it will gain to balance US supremacy in the wider Middle East.

Third, for China, the GCC states are more reliable economic and energy partners than sanctioned Iran. China prefers certain, stable, and high-return investments. China’s engagement in the Gulf is motivated primarily by maintaining access to energy resources. China imports around 32 percent of its crude oil from the GCC states. Iran, meanwhile, is losing its share in Chinese energy imports and investment. Iran’s oil exports have dropped significantly due to the US sanctions imposed in May 2019, and Chinese buyers are always worried about the prospect of continued energy relations with sanctioned Iran. While Tehran expects China to invest around US $400 billion in Iran’s economy, according to a 25-year strategic cooperation agreement signed in March 2021, Chinese businesses remain entangled over the risks of their investment in Iran. Unlike Iran’s expectation, China also signed a massive 27-year gas deal with Qatar, providing China with 4 million tons of liquefied natural gas per year. The emerging trend in the Persian Gulf is that China is deepening its multidimensional ties with Saudi Arabia, UAE, and Qatar while leaving Iran out in the cold.

Forth, given the deadlock in reviving of Iran nuclear deal and anti-government protests over the recent months, for Beijing, the prospect of a partnership with Tehran is a strategic waiting game. Due to the lack of a promising prospect of revitalising the Joint Comprehensive Plan of Action (JCPOA) and the continuation of US sanctions, the Chinese are reluctant to invest in Iran’s battered economy. Amidst the rising uncertainty about the prospect of political and economic stability inside Iran, China prefers to pursue a “wait-and-see” policy towards Iran. The bitter fact for Iranian policymakers is that China does not see Iran as a strategic partner against the US. Chinese leaders are also confident that Iran has not any alternative other than China in balancing the US hostility and, therefore, they came to the calculation that China’s siding with the GCC against Iran would not result in Tehran’s harsh reaction. Now there are rising concerns in Tehran that the “Look to East Policy” with China centrality cannot provide Iran’s national interests.

In the bigger picture, it seems China started to revise its traditional policy of a balancing act in the Persian Gulf in the aftermath of the Ukraine war. However, Beijing’s increasing engagement in the Persian Gulf does not necessarily mean that China aims to replace the US and finance a new security system. China is increasingly preparing itself to face the US, and, as a result, partners like Iran, which has not reached a clear vision about the type of partnership it wants with China, are left out of the Chinese priority in the Persian Gulf. But it is still too early to conclude that China has turned its back on Iran because China’s grand strategy rests on working with all countries in the region.

In the short term, despite the GCC’s increasing willingness to involve China in the region geopolitically, Beijing will still give more weight to geoeconomics considerations. For the time being, China is reluctant in challenging the US-led regional security arrangement in the Gulf region, but rather is confident to oppose any destabilising factors including Iran. In the foreseeable future, maintaining stability and security in the Persian Gulf to ensure energy flows will remain one of the few areas of convergence between the US and China.

Post Views: 75
Previous Le plan de découpage de la Russie
Next Why Sanctions On Russian Oil Will Be A Boon To India, But Could Trigger Volatility Globally – Analysis