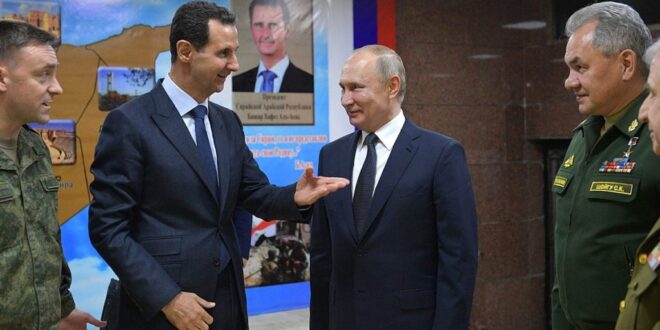 Russia’s invasion of Ukraine is reverberating more than 1,000 miles away in Syria. Squeezed by its strategic blunder, Moscow’s shrinking strategic bandwidth and its diminished capacities in Syria have disrupted the conflict’s complex power dynamics, potentially imperiling the relative calm that has prevailed since March 2020 and undermining U.S. interests. Amidst feverish jockeying among regional stakeholders, Washington should at the very least have a plan for the disruption that is likely to come.

Russia is not withdrawing from Syria. Yet it has been compelled to consolidate its forces, withdrawing some of its Wagner Group mercenaries and pulling back from some areas in southwest and far eastern Syria. Moscow also has recruited from a pool of generals known for their brutality in Syria to prosecute the war in Ukraine, drawing down Russia’s Syria expertise just as new challenges on the ground emerge. Russia has also redeployed a Syria-based S-300 air defense system to Ukraine and may be forced to withdraw additional military assets.

While the tactical shift in Russia’s military footprint in Syria — never large — is relatively small, the reordering of power dynamics on the ground is far more significant. Over the past 10 months, three strategic shifts hold the potential to reshape the conflict landscape in Syria and beyond: an empowered Turkey seizing the upper hand over Russia; an opportunistic Iran exploiting tactical advantage on the ground while deepening strategic ties with Russia; and a conflicted Israel, navigating a precarious balance between its interests in Syria and its support for Ukraine and the West. So far, Washington seems unprepared for the challenges this could create for its efforts to combat the remnants of the Islamic State, diminish tensions with Turkey, contain Iran’s regional activities, and manage its expectations of Israel.

In the wake of Russia’s aggression in Ukraine, the United States should anticipate the Syrian conflict’s shifting power dynamics. This means planning for the possibility of Turkey, Russia, and the regime working together to push U.S. forces out of northeast Syria, as well as the possibility of intensified clashes between Israel and Iran within Syria.

Turkish President Recep Tayyip Erdogan’s adroit maneuvers since the Russian invasion — positioning Ankara as a mediator between Russia and the West, arming Ukraine with drones, providing a safe haven for Russian businesses and citizens, and leveraging Turkey’s NATO membership to hold Swedish and Finnish accession hostage — has shifted the power dynamic with Russia in Ankara’s favor. An emboldened Turkey is seeking to press this advantage in Syria. Accusing Kurdish elements of a Nov. 13 terrorist attack in Istanbul, Erdogan intensified threats to launch another incursion into northeast Syria amidst a heightened barrage of air and drones strikes. To date, Russia has managed to keep Turkish ambitions in check, but for how long?

In the early months of Russia’s Ukraine invasion, Moscow managed to leverage its influence with Ankara to dissuade Erdogan from undertaking another incursion into northeast Syria despite the Turkish leader’s heightened threats. However, according to private discussions with Moscow-based Russian analysts, as power dynamics have shifted and Turkish pressure mounted, Putin reportedly agreed to allow Turkey more latitude to undertake drone strikes in areas across northeast Syria protected by Russian air defenses, targeting senior Kurdish military commanders and fighters with greater intensity.

With Turkish elections slated for June 2023, Erdogan can be expected to press his demands more forcefully. Concerns are mounting that Ankara will exploit its growing influence over Russia to push for a forced Kurdish withdrawal from areas near the Turkish border or, failing that, undertake a limited invasion. Russia’s primary leverage with Turkey is now economic rather than military, and should Erdogan believe that his victory in the forthcoming election depends on another Syrian incursion, Russia will be unlikely to prevent the attack.

Indeed, Russia’s desire to assuage Turkey’s concerns in Syria may have been one factor in its Jan. 9 decision not to veto the renewal of the U.N. humanitarian border crossing at Bab al-Hawa in northwest Syria. For Ankara, renewal of the crossing was a critical priority, and Russia’s obstruction of its passage would have damaged bilateral ties.

Most recently, Erdogan proposed a trilateral meeting between Turkey, Russia, and Syria to address Turkey’s security concerns and potentially move toward normalization between Ankara and Damascus, another step aimed at dismantling the Kurdish project in northeast Syria. A landmark Dec. 28 summit among Turkish, Syrian, and Russia defense ministers — a first since the conflict in Syria — signals the deepening of a trend toward normalization.

Taken together, these moves could foretell a dramatic shift in the Syrian conflict landscape that ultimately threatens the viability of the U.S.-Kurdish partnership and its counter-Islamic State mission. To preempt this threat to vital U.S. national security interests, the United States should intensify diplomatic efforts with Turkey with an eye toward deescalating Turkish-Kurdish tensions across northern Syria and Iraq. If possible, the United States should seek to reinvigorate dialogue between Turkey and the Kurdistan Workers Party. Otherwise, Washington could face a nasty fait accompli that features Turkish normalization with the Assad regime and a tripartite effort — Russian, Turkish, and Syrian — to cut down the Kurds and pressure the United States to pull out of Syria.

Russia once played a “regulating” role with Iran, seeking to curtail Tehran’s influence on the ground in sensitive areas and minimize the role of Iranian-backed militias in Syria’s formal security structures. Now power dynamics have shifted due to Russia’s invasion. As Russia’s capacities in Syria have diminished, aggressive Iranian tactics may be on the rise. Russian analysts confirm that Tehran has sought to exploit Russia’s limited pull back from certain areas of Syria, looking to fill emerging security vacuums, particularly in southwest Syria, an area of strategic importance to Israel. Israel also accuses Iran of increasingly using Syrian airports to transfer sophisticated weaponry to Hezbollah, its Lebanese ally. In a demonstration of the complex interplay among external players in Syria’s conflict, at times of particularly heightened tension with Israel, Moscow turned a blind eye to these Iranian encroachments. Private discussions with Russian analysts suggest this was in a deliberate bid to punish Israel for its perceived support for Ukraine.

Russia and Iran also have deepened strategic ties well beyond their cooperation in Syria. Iran has provided Russia with drones in its war with Ukraine and an “unprecedented” defense partnership is developing. The two countries are also seeking to create a bulwark against the West, cooperating on sanctions evasion, seeking to expand economic ties, and deepening their ideological kinship informed by their opposition to the U.S.-led international order. This emerging strategic alliance between Russia and Iran — forged in part in Syria, but now with regional and global implications — poses a significant threat to U.S. interests. At the same time, Moscow’s ties to Iran will remain somewhat constrained by Russia’s desire to deepen ties with Saudi Arabia and the Gulf while also managing its relations with Israel and Turkey.

These developments lend new urgency to efforts to create a regional security architecture. The United States is still searching for a long-term strategy that addresses the threat posed by deepened Russian-Iranian security cooperation, including on drones, ballistic missiles, and even strategic weapons. With the likely failure of the Iran nuclear deal and the specter of deepened Russian-Iranian defense cooperation, Iran’s threat to U.S. forces in Syria and Iraq as well as the threat posed to Israel by Iranian elements in Syria should now be addressed more comprehensively. The U.S. Central Command’s evolving counter-drone efforts could form the leading edge of a more robust response to this evolving threat.

Russia’s invasion of Ukraine has created a wedge between Russia and Israel. Tensions between the two countries — starting under the administration of former Prime Minister Naftali Bennet and continuing throughout the administration of former Israeli Prime Minister Yair Lapid — provoked an escalatory military dynamic in Syria. Sparked by Moscow’s anger over Israel’s posture on Ukraine — and despite Israeli efforts to adopt a balanced position — Russian forces fired an S-300 missiles at Israeli jets in Syrian airspace in May 2022. The Russian move signaled to Israel that Russia could disrupt longstanding security coordination measures between Russia and Israel in Syria. In another provocation, Russia also threatened to close the Jewish emigration agency in Russia.

For its part, Israel has felt compelled to respond to Iran’s opportunist tactics in Syria in light of Russia’s more lax control. It has engaged in ever bolder attacks to signal its determination to protect its security interests while exploiting Russia’s diminishing capacities. Israel has undertaken a series of unprecedented strikes over the past six months, targeting the Damascus and Aleppo airports and forcing their temporary closure, including most recently a Jan. 2 strike on the Damascus airport that killed two Syrian soldiers. Israeli has also struck multiple sites along Syria’s Alawite-dominant coast, a particularly sensitive region for the Assad regime.

Benjamin Netanyahu’s return as prime minister could deescalate tensions between Russia and Israel, given his warm personal ties with Putin. The new Israeli foreign minister recently spoke with his Russian counterpart, promising that Israel would refrain from public condemnations of Russia. But the Israeli security establishment has voiced growing alarm about Moscow’s deepening military cooperation with Tehran, posing a thorny challenge. Moreover, Israel faces continued pressure to provide air defense systems if not to Ukraine then to neighboring NATO countries — a move that could provoke a Russian retaliation against Israel in Syria.

The United States has a key role to play in ensuring that Russian-Israeli tensions in Syria do not escalate into a dangerous flashpoint. Should Israel yield to Western pressure to provide air defense systems to Ukraine or a NATO country, Russia could again take a more aggressive stance against Israel in Syria. Similarly, Russia’s growing defense and security cooperation with Iran could also provoke a strong Israeli response there, especially if Russia opts to continue allowing Iran to undertake action deemed threatening to Israel.

As Russia pivots its attention and resources to Ukraine, Syria’s complex chessboard could be upended with significant implications for U.S. national security interests and regional stability. In anticipation of these changes, Washington should elevate Syria from its current low standing among U.S. national security priorities. Specifically, the United States should launch a new review of Syria strategy in light the conflict’s shifting dynamics. The United States should also enhance its diplomatic and security engagement, appointing a Special Presidential Envoy for Syria who can engage on the many challenges emerging from the conflict’s changing landscape. This new envoy should explore how the United States can mobilize its diplomatic capital to address mounting tensions where possible — prioritizing the Turkish-Kurdish conflict — and how to reinforce security arrangements to prepare for shifting dynamics on the ground. Ultimately, the United States should help catalyze a new regional security architecture as the region enters a new phase marked by growing cooperation between Russia and Iran alongside the collapse of the Iran nuclear deal.