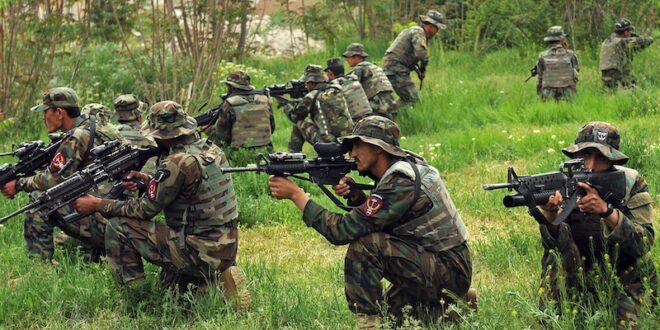 According to multiple reports, Russia is recruiting Afghan security personnel, who were previously trained by the United States, for its war effort against Ukraine. The former Afghan elite commandos and soldiers are reportedly joining the Russian private military company known as the Wagner Group, a private mercenary force playing a prominent role in Moscow’s war against Ukraine—especially in the recent intense fighting around Bakhmut (Radio Free Europe/Radio Liberty, December 27, 2022).

Before its military withdrawal, which was completed in 2021, the US built and trained the Afghan National Defense and Security Forces, spending almost $90 billion over the past 20 years. US Navy SEALs and the British Special Air Service handled most of the training for these units. When US forces finally left Afghanistan, between 20,000 to 30,000 Afghan commandos remained in the country (Kyiv Independent, October 26, 2022).

Although Russian authorities deny reports on the recruiting of former Afghan soldiers, several former Afghan security personnel have disclosed that Tehran has been enlisting former Afghan soldiers in Iran for their deployment against Ukraine. The Kremlin has offered them Russian citizenship and a better life in Russia in exchange for joining the war effort (Afghanistan International, November 2, 2022).

A former member of the Afghan special forces expressed his views on being abandoned by the US and the former Afghan government lamenting that “after the fall of the country’s traitorous presidential regime, [the US] sold us out and surrendered the country to terrorists [the Taliban]. … We had no place to live in Afghanistan anymore, because the Taliban terrorists chased us. … Several of our peers were captured and beheaded, and we were forced to leave Afghanistan” (Radio Free Europe/Radio Liberty, December 27, 2022).

This statement reflects precisely why some Afghan commandos are open to joining Russia’s aggression against Ukraine. Thousands of Afghan soldiers fled Afghanistan and took refuge in neighboring countries, including Iran, to save themselves from Taliban fighters following the Taliban’s takeover of Afghanistan after the withdrawal of American troops and surrender of the Afghan government in 2021 (Radio Free Europe/Radio Liberty, July 9, 2021). As a result, they face a plethora of security threats and financial challenges, de facto forcing them to join the Russian mercenary force.

Overall, these Afghan soldiers would prefer to avoid fighting for Wagner, but their compulsions push them to join the Russian mercenary force. Their minds are filled with multiple fears— deportation, security concerns for their families, financial problems, as well as fears of being killed at the hands of the Taliban. As former Afghan general Abdul Raof Arghandiwal put it, “They do not want to go fight—but they have no choice” (Al Jazeera, November 1, 2022).

For its part, Tehran is playing a key role in recruiting those former Afghan commandos and soldiers now in Iran on Moscow’s behalf. “The recruitment is happening right now in Iran and in Afghanistan,” said Farid Ahmadi, former lieutenant-general and ex-commander of Afghanistan’s Special Operations Command. “They offer them salaries, visas for family members and relocation to other countries in exchange for going to war for [the Russians]” (Central.asia-news.com, November 24, 2022). Moscow has offered the Afghan soldiers a monthly salary of $1,500 and a safe haven for themselves and their families, who face death threats from the Taliban in Afghanistan (Al Jazeera, November 1, 2022).

Russia faces a shortage of experienced soldiers in Ukraine and hence has looked to Tehran, among others, for answers. Accordingly, Afghan soldiers in Iran are increasingly afraid of deportation. “To prevent its biggest defeat in the Ukraine war, Moscow has now turned to recruiting Afghan personnel,” said Rahmatullah Hassan, a former Afghan army colonel, now based in Sweden. “Iran did not send its 60,000-strong Afghan fighting force [the Fatemiyoun Division, more commonly characterized as a ‘militia’ and closer to 6,000 in number], which it has used in its wars in Iraq and Syria, since the Fatemiyoun is Shia. Instead, it decided to take advantage of the tough situation of Afghan commandos who are taking refuge in Iran and started recruiting them in a joint decision with Russia and the Wagner Group” (Central.asia-news.com, November 24, 2022).

A former Afghan security official warned that integration of Afghan special forces into the Russian military “would be a game-changer” on the Ukrainian battlefield (Kyiv Independent, October 26, 2022).

Critics have accused Tehran of aiding and abetting Moscow’s actions in Ukraine. “The Iranian government is a partner in Russia’s crimes in the Ukraine war,” Arghandiwal argues. “It provided Russian troops with various types of weapons and drones so that its strategic ally would not be weakened against the US and NATO [North Atlantic Treaty Organization] in the Ukraine war” (Central.asia-news.com, November 24, 2022).

Iran has, however, dismissed the reports that Tehran is sending former Afghan soldiers to fight on the Russian side. Regarding these allegations, Sayed Abass Badri, media director of the Iranian embassy in Kabul responded: “There may be rumors regarding the use of [Afghan] forces in the war in Ukraine, which the Islamic Republic denies” (Tolonews, December 2, 2022).

Yet, even some Taliban authorities also claim that Iran is using former Afghan soldiers as a military force in Syria, Iraq and Ukraine. Khalil Rahman Haqqani, the acting minister for refugees and repatriation in the Taliban government declared, “I have shared this issue with them [Iranian authorities], Afghans have previously been used in the fighting in Iraq and Syria, and it may have occurred in the war in Ukraine as well” (Tolonews, December 2, 2022).

Ironically, Moscow is recruiting the Taliban’s enemies at a time when it is trying to strengthen its relations with Kabul. In September 2022, Russia signed a trade deal with the Taliban in a move to promote rosier relations with Afghanistan. Under the deal, Moscow agreed to provide petroleum products and wheat at a discount rate to Kabul (Al Jazeera, September 28, 2022).

Thus, while reports are proliferating regarding the recruitment of Afghan soldiers for the Russian war effort, the overall impact these forces might have on the battlefield in Ukraine remains to be seen.