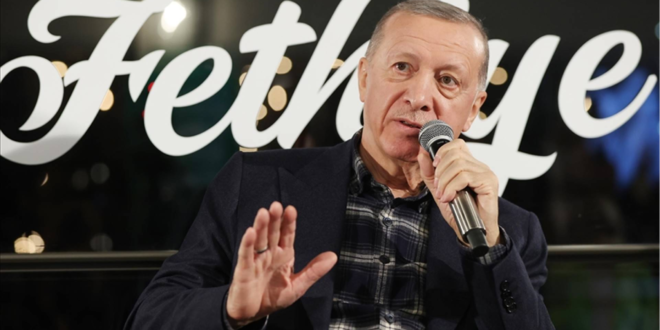 Sweden must extradite terrorists if wants to join NATO: Türkiye

If the Swedish government fails to take action on ongoing terrorist PKK/PYD propaganda, the tension in ties may grow, says Turkish President Erdogan

Türkiye on Sunday criticized Sweden along with other European states over tolerating a continuing terrorist presence, as the country’s president said the extradition of terrorists is a must for the Nordic country to earn the right to enter NATO.

“We’ve told them (Sweden), ‘Look, if you don’t extradite the terrorists you have then we can’t ratify this (NATO membership) in our parliament’,” Recep Tayyip Erdogan told a youth meeting, referring to Sweden and Finland’s pledges last June to take a firm stance against terrorists in order to gain NATO membership.

“First of all, they need to extradite nearly 130 terrorists in order for their bids to pass our parliament, (but) unfortunately they have yet to do this,” he added, speaking in Mugla, southwestern Türkiye.

“Interestingly, their court rejected the deportation of Bulent Kenes to us,” Erdogan added.

Kenes, the former editor-in-chief of Today’s Zaman daily and a suspected member of the Fetullah Terrorist Organization (FETO), lives in Sweden.

In the defeated 2016 coup in Türkiye orchestrated by FETO and its US-based leader Fetullah Gulen, 251 people were killed and 2,734 injured.

Saying that demonstrations by the terrorist PKK are often seen on the streets of the capital Stockholm, Erdogan underlined Türkiye repeatedly warned Sweden about this but “despite our warnings, unfortunately, there was no action on stopping PKK/PYD demonstrations.”

“If they do not take a stand against this situation in Sweden, it could make tension in our ties with Sweden grow even more,” he added, just days after a demonstration in Stockholm directly threatened Erdogan himself.

Stressing that the terrorist groups have a presence not only in Sweden and Finland, Erdogan said they are also seen in such countries as Germany, France, and the UK, even though the PKK is on the official European Union list of terrorist groups.

“Türkiye will determine our attitude towards them accordingly,” he stressed.

In its more than 35-year terror campaign against Türkiye, the PKK – listed as a terrorist organization by Türkiye, the US, and the EU – has been responsible for the deaths of over 40,000 people, including women, children, and infants. The YPG/PYD is its Syrian branch.

Under a June memorandum between Türkiye, Sweden, and Finland, the two Nordic countries pledged to take steps against terrorists in order to gain membership in the NATO alliance, which they are seeking in light of the nearby Russian war on Ukraine.

Unanimous agreement from all NATO members – including Türkiye, a member for more than 70 years – is needed for any new members to be admitted to the alliance.

Türkiye has praised some steps taken by Sweden and Finland but says the countries need to do more, particularly in the wake of a provocative terrorist demonstration last week in Stockholm, Sweden which directly threatened the Turkish president.

Emphasizing that Türkiye’s role in global politics is unique, Erdogan said Türkiye was the country to solve the critical issue of the Black Sea grain corridor.

“Our work isn’t done. When everyone was attacking Russia, we did not. On the contrary, we maintained our ties with Mr. (Russian President Vladimir) Putin. In fact, he made a nice offer, saying, ‘Let me send grain for free’,” said Erdogan.

In response, said Erdogan Türkiye pledged to make flour from the Russian grain and send it to African countries in need.

Last July, Türkiye, the UN, Russia, and Ukraine signed an agreement in Istanbul to resume grain exports from three Ukrainian Black Sea ports blocked due to the war, risking a world food crisis.

A joint coordination center with officials from the three countries and the UN was set up in Istanbul to oversee the grain shipments.

The first ship carrying grain under the historic deal departed on Aug. 1 from the Ukrainian port of Odesa.

Türkiye, internationally praised for its unique mediator role between Ukraine and Russia, has repeatedly called on Kyiv and Moscow to end the war through negotiations.

Post Views: 49
Previous 2023 Kosovo: Implementation of Brussels and Washington agreements
Next Abramovich Had Secret Partnership with Kremlin in a Major Forestry Company