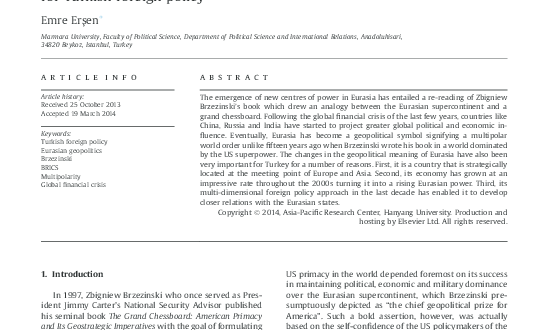 Rise of New Centres of Power in Eurasia: Implications for Turkish Foreign Policy

The emergence of new centres of power in Eurasia has entailed a re-reading of Zbigniew Brzezinski’s book which drew an analogy between the Eurasian supercontinent and a grand chessboard. Following the global financial crisis of the last few years, countries like China, Russia and India have started to project greater global political and economic influence.

Eventually, Eurasia has become a geopolitical symbol signifying a multipolar world order unlike fifteen years ago when Brzezinski wrote his book in a world dominated by the US superpower. The changes in the geopolitical meaning of Eurasia have also been very important for Turkey for a number of reasons.

First, it is a country that is strategically located at the meeting point of Europe and Asia. Second, its economy has grown at an impressive rate throughout the 2000s turning it into a rising Eurasian power. Third, its multi-dimensional foreign policy approach in the last decade has enabled it to develop closer relations with the Eurasian states.