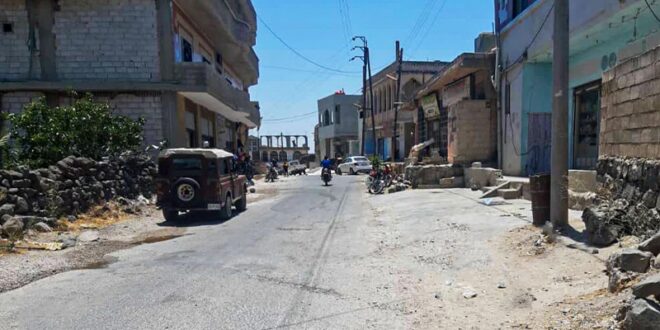 Local networks reported that the assassination of Amer al-Nassar took place on Sunday, according to Enab Baladi.

Amer al-Nassar, nicknamed “The Colonel,” a militia commander in Daraa, was killed by direct fire while he was in a house in the city of al-Hara, northwest of Daraa.

Local networks reported that the assassination took place on Sunday. It also resulted in the death of a woman who was with Nassar, as local sources said that she was targeted by gunfire.

The Ahrar Houran Gathering said that Nassar “leads a local group working for the State Security Branch in the Al-Jidour area,” after undergoing “settlement” in 2018.

He participated alongside his group in raids and arrests wanted by the Assad regime in the city of Hara, commissioned by State Security officers.

Amer hails from the town of Nimr and was a former commander in the Free Syrian Army’s Jaish al-Ababil faction.

Daraa governorate witnesses almost daily assassinations and attempts against civilians and military personnel. This is the case despite the fact that regime forces have extended their control over most of the governorate under “settlement” agreements conducted by opposition factions and Daraa notables (central committees) with Russian mediation in the summer of 2018.

In the city of Talbiseh near Homs, National Defense official Rami Rahal was killed when an explosive device planted by unknown assailants exploded under his private car.

The dead man was the son of Ahmed Rahal, head of the Talbiseh City Council, who was also killed three months ago when an explosive device planted by unknown assailants detonated in his car.

In addition to taking over the National Defense, Rami Rahal is the director of the Citizen Service Center in Talbiseh, while his father was president of the city council.

The father and son are influential figures in the northern countryside of Homs, known for their proximity to the joints of the Syrian regime government and the security militias deployed in the area. They had a role in the last “settlement” agreement in May 2018.