The first of the four S-300 surface-to-air missile systems that Russia has contracted to supply to Belarus arrived in Minsk on April 21, Belapan reported, quoting Belarusian Defense Minister Leanid Maltsau. Maltsau added that the remaining three system will be delivered until the end of this year. The systems, which will reportedly include 24 launchers, are expected to be used in a common air defense system currently created by Belarus and Russia to guard Belarus’s western borders. Maltsau denied a report earlier this month by Jane’s Intelligence Digest suggesting that Belarus may reexport S-300 missile systems to Iran. “Under the contract for the delivery of the S-300s from Russia, Belarus does not have the right to transfer these systems anywhere else,” he said. Russian Defense Minister Sergei Ivanov said in Minsk the same day that he hopes an agreement establishing a common air defense command of Belarus and Russia will be signed this year. Ivanov explained that under the accord, the command will be able to deploy aircraft and air-defense systems across the Belarusian-Russian border without waiting for “political decisions” to that effect. 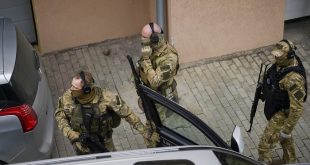