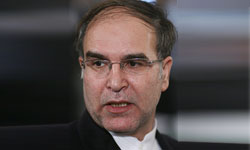 TEHRAN (FNA)- Iran’s ambassador to Pakistan Mashallah Shakeri said Pakistan has arrested suspects that may have been engaged in kidnapping Iran’s commercial attaché to Pakistan Heshmatollah Attarzadeh Niaki. Pakistani police is interrogating the suspects to find the place of Iranian diplomat, he said, the Iranian students news agency reported.

Iran’s commercial attaché to Pakistan was abducted by gunmen and taken to an unknown place on Thursday while on his way to Tehran’s consulate in the Pakistani city of Peshawar.

His driver was also murdered during the attack.

The terrorist action was heavily condemned by Tehran and Pakistani charge d’affaires was summoned to Iran’s Foreign Ministry following the attack.

Whither Iran on the Revolution’s Anniversary?

The regime is more vulnerable than ever, even as domestic reforms, nuclear diplomacy and better …