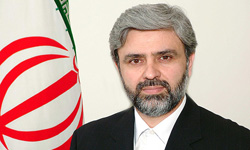 TEHRAN (FNA)- Deputy Foreign Minister for Legal and International Affairs Mohammad Ali Hosseini on Sunday ruled out the possibility that Iran and the United States will resume diplomatic ties. Hosseini criticized the United States’ instrumental view towards its relations with the world, adding, “The restoration of Iran-US ties will not succeed within the framework of international law.”

“The Americans are trying to induce everyone to believe that the United States is the most powerful country…The US wants to make all countries believe that their progress is dependant on obeying the US,” MNA quoted Hosseini as saying.

“The collapse of the Soviet Union showed to the Americans that the time for implementing unilateral policies is over and they should no longer regard themselves as the power of the world,” he observed.

The United States and Iran broke diplomatic relations in April 1980, after Iranian students seized the United States’ espionage center at its embassy in the heart of Tehran. The two countries have had tense relations ever since.

Relations between the two arch foes deteriorated following Iran’s progress in the field of civilian nuclear technology. Washington and its Western allies accuse Iran of trying to develop nuclear weapons under the cover of a civilian nuclear program, while they have never presented any corroborative evidence to substantiate their allegations. Iran denies the charges and insists that its nuclear program is for peaceful purposes only.

Iran insists that it should continue enriching uranium because it needs to provide fuel to a 300-megawatt light-water reactor it is building in the southwestern town of Darkhoveyn as well as its first nuclear power plant in the southern port city of Bushehr.

Iran currently suffers from an electricity shortage that has forced the country into adopting a rationing program by scheduling power outages – of up to two hours a day – across both urban and rural areas.

Iran plans to construct additional nuclear power plants to provide for the electricity needs of its growing population.

The Islamic Republic says that it considers its nuclear case closed as it has come clean of IAEA’s questions and suspicions about its past nuclear activities.

Washington’s push for additional UN penalties contradicts a recent report by 16 US intelligence bodies that endorsed the civilian nature of Iran’s programs. Following the US National Intelligence Estimate (NIE) and similar reports by the IAEA head – one in November and the other one in February – which praised Iran’s truthfulness about key aspects of its past nuclear activities and announced settlement of outstanding issues with Tehran, any effort to impose further sanctions on Iran seems to be completely irrational.

The UN nuclear watchdog has so far carried out at least 14 surprise inspections of Iran’s nuclear sites so far, but found nothing to support West’s allegations.

Also in his latest report to the 35-nation Board of Governors, IAEA Director General Mohamed ElBaradei confirmed “the non-diversion” of nuclear material in Iran and added that the agency had found no “components of a nuclear weapon” or “related nuclear physics studies” in the country.

Many world nations have called the UN Security Council pressure against Iran unjustified, especially in the wake of recent IAEA reports, stressing that Tehran’s case should be normalized and returned to the UN nuclear watchdog due to the Islamic Republic’s increased cooperation with the agency.

Observers believe that the shift of policy by the White House to send William Burns – the third highest-ranking diplomat in the US – to the latest round of Iran-West talks happened after Bush’s attempt to rally international pressure against Iran lost steam due to the growing international vigilance.

“Dialogue between countries in the region is better than pressure from outside,” he said Thursday, delivering an opening speech at the World Economic Forum on Europe and Central Asia.

Nations in the region could likely find solutions to Middle East conflict and tensions in Iraq by working together and without external pressure, Erdogan said.

In August, Turkish President Abdullah Gul said that Ankara would not be influenced by others in its relations with neighbors. Gul described the expansion of regional ties as natural, saying that “for Turkey what other countries think is of no importance.”