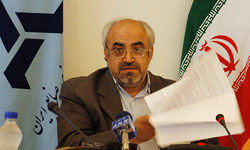 Shaterzadeh made the remarks during a visit to the Arab-Brazilian Chamber of Commerce in the city of S?o Paulo.

Even though Iran is not an Arab country, the ambassador wanted to get to know the Arab-Brazilian Chamber and its board of directors, due to the importance that the organization has within the entrepreneurial community in Brazil and especially in Sao Paulo, which is the leading trade hub in the country.

“The first step in order to achieve this goal consists of expanding economic relations between the two countries up to US$ 10 billion in the short term,” the diplomat said.

The figure does not include bilateral trade alone, but also mutual investment and projects implemented through partnerships between governments and private companies.

Taking only the flow of goods into consideration, bilateral trade between Iran and Brazil reached US$ 1.85 billion in 2007, representing growth of 15.6% over 2006, according to figures supplied by the Brazilian Ministry of Development, Industry and Foreign Trade.

He further pointed out that his country has capital in store and an ambitious investment plan forecasting the injection of US$ 3.6 trillion into different areas, over a 20-year period.

By the same token, Shaterzadeh asserted that Brazil is another economic power.

“We believe that the two countries have the potential and the capacity for increasing cooperation in the economic area,” he said.

According to the diplomat, Iran is interested in developing projects in sectors such as mining, oil and gas, petrochemicals, auto industry, and auto parts, among others.

He expressed Iran’s interest, for instance, in the Brazilian ironworks industry.

Given the availability of iron ore in Brazil, the Iranians might invest in the manufacturing of raw steel here, and then export it to the Middle Eastern country and other destinations, he said.

Ore is the fifth item in the Brazilian export basket to Iran, with shipments of US$ 50 million between January and October this year, according to the Ministry of Development.

The same logic, according to the ambassador, applies to the agricultural area: Iranian businessmen might invest in Brazil in order to ensure the food supply to Iran. Beef, soy oil, sugar, and soy chaff are the four main items in the basket of Brazilian exports to Iran. Maize and soybean rank, respectively, seventh and eighth in the basket.

On the other hand, Shaterzadeh informed that in the processing and mining industries, Iran aims to invest US$ 450 billion over the course of 20 years. The country is also willing to implement different projects in the infrastructure, oil refining, and petrochemical sectors.

In order to encourage trade, investment and partnerships, a business delegation from Iran is due to visit Brazil in January 2009. Also next year, the Brazilian president Luiz In?cio Lula da Silva will visit the Middle Eastern country. Prior to that, the Iranian Foreign Minister, Manouchehr Mottaki, is going to pay a visit to Brazil.

The Brazilian chancellor, Celso Amorim, came to Iran early this month accompanied by a business delegation. In the first half this year, the Brazilian Ministry of Agriculture organized a trade mission to the Middle East and North Africa that included Iran, Algeria and Egypt.

“We already sustain good cooperative relations in Latin America, with Venezuela, Nicaragua, Cuba, Bolivia, Ecuador and now Paraguay. In Brazil, we have identified general areas for cooperation,” said Shaterzadeh, who started his term in office in Bras?lia four months ago.