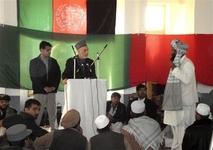 The American military has said that its forces killed three people targeted as “known individuals with al-Qaida links” during a raid Dec. 17. Col. Greg Julian said the “insurgents” had weapons and tried to fire on the U.S. forces first.

Afghan officials say the three killed were innocent Afghans, and Karzai on Monday asked Adm. Mike Mullen, the chairman of the Joint Chiefs of Staff, to investigate the deaths.

The three killed were Amir Hassan, 40, his wife and a 14-year-old nephew, said Haji Balal Hassan, the brother of Amir Hassan.

Balal Hassan said that Karzai shared his condolences during the ceremony in eastern Khost province and asked for details of the incident.

Some 800 people attended the memorial ceremony. Karzai told the crowd he is working on the problems, but said for now the country needs foreign troops despite pleas from some in the audience for international forces to leave.

One young man in the crowd yelled out to Karzai, “Death to those who are killing Afghans.”

Civilian deaths from military operations stokes deep anger in Afghans across the country, and Karzai for years has pleaded with international military forces to avoid such killings. His attendance at the ceremony underscores the importance of the issue to him.

“In a conflict like Afghanistan, where half of the battle is to ensure that the population does not begin supporting the insurgent forces, or at least does not stop supporting the government forces, public perceptions of supposed violations and misconduct matter,” said the report by the Afghan Independent Human Rights Commission.

Elsewhere, fugitive Taliban leader Mullah Omar said through a spokesman Tuesday that there are no talks or negotiations between the Taliban and the Afghan government.

Afghan and international media outlets have reported recently of behind-the-scenes talks being planned or already carried out. But Omar said no such talks have or will take place, Taliban spokesman Zabiullah Mujahid said.

In October, a former Taliban ambassador to Pakistan, Abdul Salam Zaeef, said that he traveled to Saudi Arabia at the invitation of Saudi King Abdullah and that Afghan officials were also present. He denied that any talks took place.

Karzai has appealed to Omar and even offered him safe passage to engage in talks to end the insurgency that the Taliban has waged since a U.S.-led invasion drove the hard-line Islamist group from power in 2001.

US limits contacts with Afghan military after insider attacks

In letter to American people, Taliban claims it seeks end to war

In an open letter to the “American people,” the Taliban militant group has claimed it …