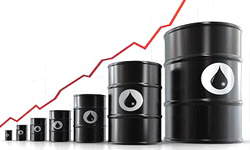 TEHRAN (FNA)- Crude oils from the Middle East were at premiums to their benchmarks on concern that supplies would be limited after Iran said it would cut February shipments to Asia.

The state-owned National Iranian Oil will lower supplies sold under long-term contracts by 14%, said two officials at refineries in Taiwan and Singapore, who asked not to be identified because of company policies.

The cut comes after the Organization of Petroleum Exporting Countries (OPEC) agreed on December 17 to reduce output to stem falling oil prices.

“OPEC has been seen to manage a situation where demand is dropping,” said Tony Regan, an independent oil and gas consultant who is based in Singapore. “They have cut back in a controlled way.”

Oman crude oil futures for March delivery gained 34c to $50,44 a barrel on the Dubai Mercantile Exchange yesterday, with 564 contracts traded. The settlement price was set at $50,47 .