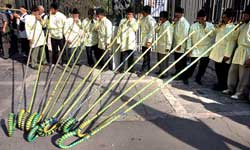 TEHRAN (FNA)- The tradition of playing a musical instrument called the karna has long been practiced in the northern region of Gilan Province during the month of Muharram and on the day of Ashura (the day when Imam Hossein (AS) and his seventy-two companions were martyred on 10th of Muharram).

The karna is a wind instrument with no holes in it that produces a powerful bass sound by means of the breath of the player.

This religious ceremony of playing the karna is mostly practiced in the cities of Astaneh-Ashrafieh, Rahimabad, and Kalachay in the eastern part of Gilan, MNA reported.

A team of ten of which one is the leader usually play their karnas and others accompany him. The leader first blows a sad melody on his karna and the others reply.

The instrument is mainly used during the mourning ceremonies for Imam Hussein (AS) but also is used in the commemoration ceremonies for the Iran-Iraq war martyrs and families who have lost their loved ones.

The instrument is made from a ney (reed) whose length varies from 2 to 4 meters or even more. Its head forms a shape of cane is made from a squash and is the place where the sound emerges.

The karna is also made differently in other provinces. The most important ones are made in Gilan and Mashhad. It is also used in Kordestan and Azarbaijan regions as well.

The word karna is a combination of kar meaning war and nay or the same ney. In Gilan, the karna is made of three parts, the mouth piece from which the instrument is played, the body, and its head which is the cane-shaped from which the sound emerges.

The month of Muharram has always had great importance among the Shiites. People look forward to this month and try to preserve its old traditions.

So we see that the arts like tazieh (passion play) and reciting elegies are really not separated from Muharram traditions and have helped transmit the message of Ashura to successive generations.