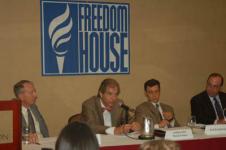 The 2008 Freedom House report classifies newly-independent Kosovo as a “not free” country, while Albania, Bosnia, Montenegro as well as European Union-candidate Macedonia are only “partly free”.

Freedom House is a United States-based international NGO that conducts research and advocacy on democracy, political freedom and human rights. Its annual survey gives a country one of three grades, “free”, “partly free” or “not free”, assigning points on political and civil liberties with a rating of 1 indicating the highest degree of freedom and 7 the lowest.

Newly independent Kosovo is the worst performing country in the region, the only one in the Balkans graded as “not free” with a political liberties score of 6, and a civil liberties score of 5. The report blames the residual hostility between ethnic Albanians and Serbs from the 1998-99 war, as well as the tight hold of the United Nations mission that ran the province from 1999 and retained a significant role even after Kosovo’s declaration of independence from Serbia last February.

“Elections since 1999 have been considered generally free and fair,” Freedom House says, “however, given the large role played by international officials, the lack of freedom of movement for ethnic minorities, and the limited ability of women to participate in the political process, the actual level of democratization remains low. The 2004 and 2007 parliamentary elections were marred by the fact that nearly all Serb voters boycotted the polls.”

The report singles out ethnic tensions as a main issue, while noting that “Kosovo lacks a functioning criminal justice system.” It says “gender inequality is a serious problem” and “in many rural areas, women are effectively disenfranchised by “family voting,” in which the male head of a household casts ballots for the entire family.” It notes domestic violence and discrimination against sexual minorities as problems.

On Bosnia, it says its political rights rating “declined from 3 to 4 due to a political crisis that ensued over reforms introduced by the internationally appointed High Representative,” and adds that Bosnia “is not an electoral democracy.”

“Corruption, which remains a serious problem, is most common in local politics, but it also penetrates the higher levels of the Bosnian leadership,” the report notes, adding that ethnic politics influences both academic appointments and primary and secondary school curriculums.

“Ethnic nationalism in Bosnian society is widespread and presents a major obstacle to the country’s integration,” it says, and “individuals are discriminated against in terms of employment, housing, and social services in regions not dominated by their own ethnic group.”

The report said corruption pervades all areas of life in Albania, but gave the government points for its efforts to address it. Another main issue was the erosion of freedom of the press.

“The intermingling of powerful business, political, and media interests inhibits the development of independent outlets, and suits against journalists for legitimate criticism are common,” it said. “Journalists are still subject to intimidation and attacks, although the identity and motives of the perpetrators are not always clear.”

It added that the judiciary and law enforcement agencies “are inefficient and prone to corruption, and judicial proceedings can be unjustifiably delayed.” It also noted that domestic violence “is common and is not a criminal offense” while women who seek redress against domestic abuse are often ignored by the authorities.

In Montenegro, corruption was again a serious problem and while “freedom of the press is generally respected, but journalists who are critical of the government have been attacked on a number of occasions.”
“The judicial system lacks independence from political authorities, and judicial corruption remains a significant problem,” the survey said.

The report said that corruption continues to hamper economic growth and political transparency in Macedonia, and noted that freedom of the press was suffering from political interference and pressure. “The judiciary is widely seen as corrupt and incompetent,” the report added, highlighting remaining ethnic tensions both within the 25-percent Albanian minority, and between the Albanians and the Macedonian majority.

All other Balkan countries, notably Bulgaria, Croatia, Greece, Romania and Serbia were classified as ‘free’.

On a global level, the world has entered a “period of freedom stagnation,” with Sub-Saharan Africa and the former Soviet Union showing the most decline, the report says.