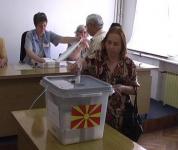 Six hopefuls have so far confirmed they have raised enough support for formalizing their candidacy in Macedonia’s presidential election next month, local media said.

The deadline for rising the required ten thousand signatures expires on Tuesday at midnight, the State Election Commission said.

Macedonia holds both presidential and local polls on March 22. The elections, seen as crucial for the country’s democratic credibility, will be closely monitored by European Union officials.

In June last year the general election was marred with violence and ballot stuffing in the ethnic Albanian populated areas causing harsh criticism by the EU.

Various opinion polls show the ruling VMRO has a strong lead and analysts say their candidate has the biggest chance of becoming the next head of state.