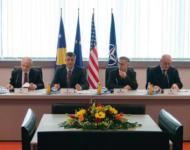 On the eve of the first anniversary of the declaration of independence, Kosovo’s government and parliament are racing to finalize work that has been delayed throughout the year.

In less than two weeks, the government finally recruited a chief for the Kosovo Intelligence Agency, form a security council and attempted to choose a guardian of the public interest, an Ombudsperson.

Authorities have also rushed to fill other key public positions, such as police commanders.

Opposition parties have relentlessly criticized the hastened completion of these obligations, which they say should have been done months ago, not a few days before Independence Day.

“The government has left many task behind and now they are carelessly completing absolutely everything before the first anniversary of independence”, Ardian Gjini, of the opposition Alliance for the Future of Kosovo, AAK, told Balkan Insight.

Last Wednesday saw the inauguration of Kosovo’s first Intelligence chief, former police lieutenant-colonel Bashkim Smakaj. Under the constitution, the President and Prime Minister are responsible for selecting the post and a decision was months overdue.

Memli Krasniqi, government spokesperson, said delays had occurred because of the sensitivity of the position. “It is more important to get the right person for the job than to get someone quickly,” he said.

“Considering it was formed six or seven months ago, it should have planted its seeds throughout the whole territory of Kosovo [immediately] so as to be as effective as possible,” he said.

The appointment of the head of the intelligence agency allowed for the formal creation of the Security Council, an advisory body tasked with safeguarding Kosovo’s national security and sovereignty.

The fragile and occasionally violent situation in the north of Kosovo remains the country’s biggest security challenge.

Ibrahim Makolli, of the leading opposition Alliance for a New Kosovo, AKR, said the time lag had only increased the fragility of the situation in the northern Serb-dominated half of Mitrovica.

“The delay in completing these tasks conflicts with the constitution we ratified nine months ago, and this reluctance to take charge is creating a gap for more instability,” he told Balkan Insight. “The situation in the north might have been [more] under control if these institutions had been created earlier,” he added.

Kosovo’s assembly failed today to vote for an Ombudsperson, as neither candidate received enough votes.

The assembly has failed to vote in an Ombudsperson three times in the last two years. Policy analyst Ilir Deda, of the Kosovar Institute for Policy Research and Development, KIPRED, says the government is to blame. “The parties want to politicize the institution; this was the case with previous government mandate and it is the same now,” he said.

There has been similar criticism regarding delays over who is to run the Central Electoral Commission, CEC, an institution charged with organizing elections. This is the first time that Kosovars are fully in charge of organizing such polls.

Memli Krasniqi said parliament rather than the government was responsible for selecting the Ombudsperson and the head of the CEC.

However, critics of the government say the two main ruling parties, the PDK and LDK, which hold most seats in the assembly, could have pushed for a decision on these institutions had they wanted to.

Ilir Deda, of KIPRED, said this clearly was not their agenda. “They have focused [instead] on getting more and more party loyalists into institutions that should be independent and comprise professional people,” he says.