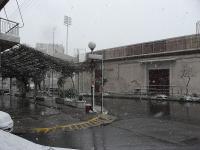 An Albanian convict and the Greek ringleader of his gang escaped from an Athens high security prison using a helicopter for the second time in three years, one day before they were due to appear in court.

In a prison break worthy of a Hollywood action movie, Alket Rizai and Vassilis Paleokostas escaped after accomplices highjacked the helicopter, flew it to Korydallos prison and threw them a rope on the rooftop, Greek media reported.

According to the Associated Press the helicopter was later found abandoned in a highway, with the pilot bound and gagged with a hood over his head.

Paleokastas and Rizai, who are held for a string of bank robberies, escaped the same prison in Athens in 2006 after a highjacked helicopter landed on the prison yard during exercise time, leaving the prison easily while guards believed the chopper was an inspection by prison official. On Sunday guards shot at the helicopter, but could not stop it or the convicts from fleeing.

Rizaj, 32, from the town of Ballsh in Southern Albania, is suspected of involvement in contract killings after his first escape from prison in June, 4, 2006. He was recaptured on September 2006, aided during his time on the run by an Albanian relative.

Greek authorities believe that the first escape was masterminded by the elder brother of Paleokostas, Nikos, captured by authorities also in Sept 2006. Nikos Paleokostas, a hardened criminal convicted of 16 bank robberies escaped the same prison in the early 1990-es.

Vassilis Paleokostas, while on the run after his first escape, is suspected of masterminding the June 2008 kidnapping of Greek industrialist, Giorgos Mylonas, who was held for 13 days until a ransom was paid.