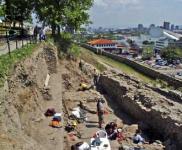 Despite the burning Skopje-Athens dispute over the name Macedonia and its historical and cultural heritage, Macedonia plans to ask Greek scientists for help in a project to excavate four major archeological sites, local media said on Wednesday.

The country will spend a record 20 million euros in the next three years on the archaeological research but currently lacks enough qualified archaeologists for the mass excavations. The Agency for the Protection of Cultural Heritage said it is considering inviting experts from neighboring countries, including Greece.

“We have a tremendous job ahead of us,” the project head, archeologist Pasko Kuzman told local Dnevnik daily. “I am aware that our scientists alone will not be sufficient” he said explaining why the Agency plans to invite their colleagues from Bulgaria, Serbia, Albania and Greece to help.

Athens and Skopje are engaged in an 18-year long dispute over the name Macedonia. In Apil Athens blocked Skopje’s NATO entry arguing that Macedonia must change its name first to prove it has no territorial claims toward Greece’s own northern province with the same name.

Greece also acuses Macedonia of presenting Greek historical figures such as Alexander the Great as its own and that it often shows off with archaeological findings that are part of ancient Greek history.

Some of the sites marked for excavation cover exactly the disputed period when the ancient warrior king Alexander and his successors ruled the ancient land of Macedon, now spread acrosss the area of both countries.

Kuzman explained that Macedonia needs several thousand qualified workers and experts for the planned excavation of the fortress in the capital Skopje, the ancient towns of Stobi and Heraclea Linkestis in central and southern Macedonia, and the great necropolis Isar near the south eastern village of Marvinci.

The works on the Skopje fortress started in 2007 and are expected to continue shortly. The other sites have also been partially explored.