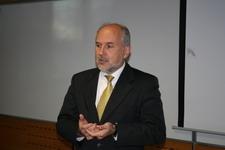 Austrian diplomat Valentin Inzko has been approved by all EU member countries to be the new EU Special Representative, EUSR, for Bosnia and Herzegovina. Inzko now faces Russian scrutiny before he can also be appointed the new High Representative to the country.

“The process is still ongoing,” Inzko told Balkan Insight in a brief statement over the phone on Thursday. He refused to provide any details about the process or comment about media reports about his appointment as the new EUSR.

Yet an EU official, speaking on condition of anonymity, told Balkan Insight that Inzko’s endorsement procedure by the EU countries was finalised on Wednesday. The Austrian diplomat now waits for the final approval of the so-called Peace Implementation Council, PIC, which is in charge of appointing the new head of the OHR.

The PIC is made up of representatives of all countries included in the peace implementation process in Bosnia, including EU member countries, US and Russia. Its next meeting is scheduled for March 26-27, when the PIC is supposed to appoint the new High Representative and to outline plans for the future international involvement in Bosnia and eventual closure of the OHR.

The last High Representative, Slovak diplomat Miroslav Lajcak, in February surprisingly announced he is leaving Bosnia to become the new Slovak Foreign Minister. In several interviews and statements after his departure, he admitted that the international presence in Bosnia – embodied in a dual-hated OHR and EUSR – has hit the wall, because of divisions within the international community and waning military support of the EU peacekeeping mission, EUFOR.

International disorientation comes at a critical moment, as tensions and animosities among local politicians have escalated into the worst political crisis since the end of Bosnia’s 1992-1995 war.

Inzko, who was the first Austrian ambassador to Bosnia, was approved by the EU following his endorsement – after initial reservations – by the American administration. He is already scheduled to travel to Moscow this weekend, to be assessed and hopefully accepted by Russian authorities, the EU source said. After that he is supposed to also visit Turkey. Over the past few years Russians have been steadily increasing their political and economic presence in the Balkans, usually on the side of their historic allies, the Serbs.

While Inzko continues his shuttle diplomacy that is supposed to win him the tough post in the troubled country, EU leaders are preparing a new paper, which should outline a new international and a new EU approach for Bosnia, EU Enlargement Commissioner, Olli Rehn, said in an interview for Balkan Insight.