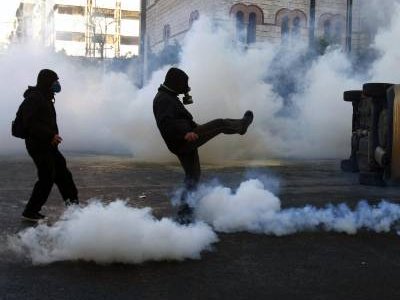 Greece has been rocked by violence since December, when the fatal police shooting of a teenager triggered the worst riots in decades.

Greek police fired teargas to disperse a group of about 150 hooded youths who damaged dozens of shops in the centre of Athens on Friday, police said.

Greece has been rocked by a wave of violence since December, when the fatal police shooting of a teenager triggered the worst riots in decades, shaking the fragile conservative government.

“About 150 anarchists clashed with police, who used teargas to disperse them,” said a police official who declined to be named. There were no injuries or arrests, police said.

The youths appeared around noon (1000 GMT) at the busy Skoufa shopping street in the upmarket Kolonaki district, and smashed at least 40 shops and four cars with rocks and sticks, a Reuters eyewitness said.

High unemployment among young Greeks and broad discontent at the government’s economic measures feed a near daily string of violent incidents in the country, that is now feeling the pinch of the global downturn after years of solid growth.