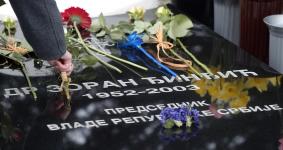 Current Prime Minister Mirko Cvetković, other members of his government, as well as former members of Djindjic’s government plced wreaths on his memorial in the government garden, while deputies of his Democratic Party were planning to take their traditional walk from their party headquarters to the Alley of The Great at Belgrade’s New Cemetery and place a wreath on the murdered prime minister’s grave.

Deputies from his party will then hold a conference titled “An Answer for the Future”, and screen a film, “The Final Word” which investigates Djindjic’s murder trial.

At the same time, Belgrade’s historic archive will open an exhibit of Djindjic’s personal items and notes he made on such burning issues of the time as reforms in Serbia, Kosovo and the EU, as well as his impressive collection of rare books and personal items. It will also show some items he had on the day he died such as his tie (with blood stains on it), cellphone, wrist-watch, wallet and bag, borrowed from his family to mark the occasion.

Pages of his ”Contract with Citizens“, written right before former Serbian President Slobodan Milosevic’s fall in October 2000 will also be shown. There will be his letters he sent to the UN Security Council in which he objects to violations of the UN’s resolution 1244 on Kosovo, and correspondence he had with the former Yugoslav President and writer Dobrica Cosic.