Macedonia Stages Most Complex Election Ever 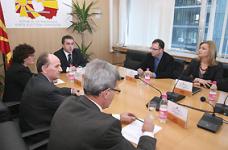 The voting process in Macedonia’s presidential and local election to be held on March 22 – with a likely second round on April 5 – will be the most complex ever staged in Macedonia’s democratic history, the head of the State’s Election Commission said on Thursday.

The situation will be most confusing in the capital Skopje where the voters will have to cast five different ballots in five different boxes, for Head of State, for mayor of Skopje, for Skopje city councilors, for a municipal mayor and for municipal councilors, said Aleksandar Novakovski said at a press conference, in which he presented an educational campaign aimed at familiarizing the voters with election procedures.

A total of six video and audio clips will be aired on the electronic media and posters will be published in newspapers to get the voters familiarized on how to exercise their right.

At the same time, people will be offered information on the specifics of the elections for president of the state, mayors and municipal counselors, he said.

Meanwhile the police said it prepared an action plan for election day.

These polls are seen as test for the country’s democratic credentials after last year’s June general polls ended up in partial violence and fraud. They will be closely watched by the EU.