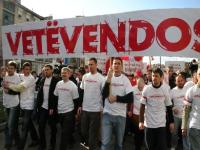 Kosovo’s popularist Vetevendosje movement has filed criminal charges against 93 leaders of Serb so called parallel institutions to Pristina’s District Court, including a charge against Goran Bogdnaovic, Serbia’s Minister for Kosovo.

Vetevendosje’s leader, Albin Kurti, said his movement filed the charges so that Kosovo’s government can no longer pretend that it does not know who leads these institutions, that he says are undermining his country’s sovereignty. Kurti said that “a Serbian republic” is being formed within Kosovo.

According to Vetevendosje, these people were responsible for several criminal acts even after the country’s declaration of independence last year, for which the law foresees 5 years imprisonment.

“They have founded the parallel structures of another country, Serbia. They operate in Kosovo and these structures are responsible for several crimes, killings, injuries, demolition of objects,” reads a Vetevendosje statement.

The government declined to comment on the statement. ”The prosecution is in charge of filing charges. I haven’t seen what Vetevendosje proposed and cannot say anything about that,” said the government spokesman Memli Krasniqi.