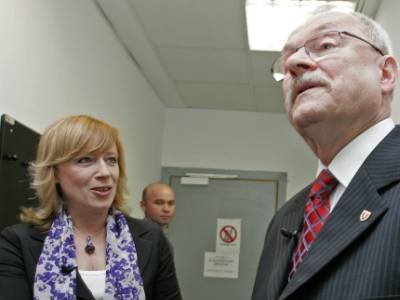 The second election round, in which the candidate with most votes becomes the president, is scheduled for April 4.

Slovakia’s President Ivan Gasparovic won the first round of a presidential election, results showed on Sunday, and he faces the strongest opposition candidate in a runoff vote in two weeks.

Saturday’s public ballot for the largely ceremonial post of president was seen as a test of support for Prime Minister Robert Fico just over a year before a parliamentary poll. Fico has endorsed Gasparovic, who got 46.70 percent of votes.

“No candidate was elected president, because no candidate obtained the required majority of votes, which is more than half of all eligible voters,” said Dusan Dugacek, the head of the Central Election Committee.

The second election round, in which the candidate with most votes becomes the president, is scheduled for April 4.

Gasparovic, a 67-year-old lawyer, was favourite for the election after maintaining a steady lead in opinion polls.

Pavel Haulik, the head of the MVK polling agency, said he expected an even more active campaign by ruling factions supporting Gasparovic to mobilise supporters before the runoff.

Fico, who came to power in 2006 promising to help the poor, has intensified his efforts to increase the government’s role in the economy in recent months saying a strong state was the best way to tackle the spreading economic crisis.

Slovakia, has not had to bail out any of its banks, but the central European state of 5.4 million has lost thousands of jobs as demand for its exports, mainly cars and TV sets, weakens in key markets such as Germany.