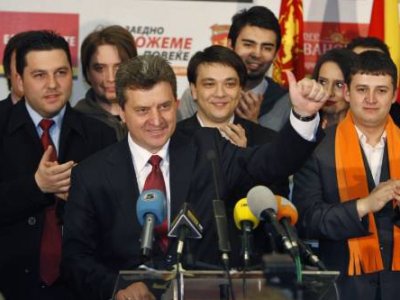 The peaceful conduct of both the presidential and parallel local elections contrasted with the violence of last year`s parliamentary poll.

Politics professor Gjorge Ivanov took a clear lead over his rivals on Monday in the first round of Macedonia’s election hailed by the European Union for its lack of violence.

According to unofficial and incomplete party tallies, 49-year-old Ivanov of the right-wing VMRO-DPMNE party was the clear favourite to win the presidency in a second round in two weeks’ time.

“The elections took place in a calm atmosphere and we commend the members of the electoral boards and citizens of this country who despite the harsh weather came out to vote.”

Fouere told Reuters an assessment report would by issued on Monday by the Organisation for Security and Cooperation in Europe (OSCE) whose observers monitored the polls.

The peaceful conduct of both the presidential and parallel local elections contrasted with the violence of last year’s parliamentary poll which aroused fears that Macedonia’s EU membership would be further delayed.

Partial results showed there was a tight race for second place between Ljubomir Frckovski, of the main opposition SDSM party, and independent Ljube Boskovski who served as Macedonia’s interior minister during an ethnic rebellion in 2001.

“Our candidate Gjorge Ivanov has more than double votes in comparison to the second place, which we still do not know,” VMRO-DPMNE official Vlatko Gjorcev told reporters. Opposition parties confirmed the trend.

The election was Ivanov’s first attempt to enter politics and his candidacy came as a surprise. He pledged to cooperate closely with the government and bring Macedonia closer to the European Union and NATO.

Seven candidates contested the first round of voting for the fourth president since Macedonia’s independence in 1991.

On person was killed and nine people were injured during the violence that marred last year’s voting.

The violence was the worst since the 2001 rebellion when Western countries narrowly helped avert a civil war using the lure of NATO and EU membership to squeeze greater rights for minorities from the government and persuade Albanian guerrillas to disarm.

Despite progress on ethnic relations, Macedonia is still largely poor, unstable and economically hampered by a 17-year-old dispute with Greece.

Athens objects to the name Macedonia, because it is also used for Greece’s northernmost province, and vetoed Macedonia’s admission to NATO in 2008 because of the dispute.

The results of the vote are unlikely to change the country’s direction. The presidency is a ceremonial position with only limited power to influence foreign policy.