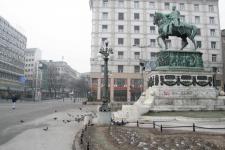 Local authorities in Bosilegrad municipality, an area around 450 kilometres southeast of Belgrade and populated by ethnic Bulgarians, have introduced a state of alert over weather conditions.

Mayor Vladimir Zaharijev said that because of the huge snow drifts of up to a metre high around 30 villages were cut off from the outside world for several days. Many village schools were closed for work.

“Around 4,000 people live in those villages. In the village of Zli Do a child had a burst appendix and I managed to get through to his house with doctors in an ATV and transport the boy to the hospital.”

“We have not had this kind of bad weather in several decades, which is why we were forced to proclaim a state of alert for the people endangered in the neighbouring villages,” said Zaharijev.

The priority of the local management, which expects aid from state institutions, is to deliver basic necessities to the most endangered villages in time.

“Our biggest hopes are for a nicer weather and a melting of the snow,” said Zaharijev.