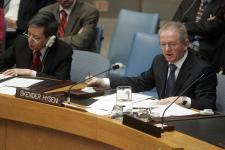 Kosovo’s Foreign Minister returned to Pristina optimistic about Kosovo’s future as an independent state, after attending meetings in New York and Prague.

Skender Hyseni represented Kosovo at the UN Security Council and the meeting of EU foreign diplomats in Prague, insisting that the Kosovo delegation be split from the United Nations Mission in Kosovo, UNMIK, headed by Lamberto Zannier.

“Kosovo’s delegation was totally independent; the invitation and accreditation were delivered to the Foreign Minister of Kosovo. Accreditation was granted exclusively to a Kosovo delegation”, he said.

Hyseni announced that he is very optimistic about more international recognition, visa liberalisation and passport recognition, after these two meetings.

“Everyone in the meetings believe all will recognise Kosovo’s independence. I had a distinguished meeting with the Chinese Ambassador, and we had a large scale of understanding”, he said.

As for his Security Council request for the conclusion of UNMIK activity in Kosovo, Hyseni believes that it will be examined very quickly by the UN.

“This request will be accepted very quickly, because in the end it is a condition that will allow EULEX to be successful. There cannot be two mandates for two reserved powers”, he said.