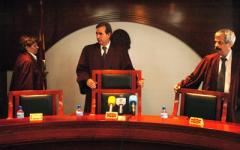 The government’s policy aimed at boosting the country’s population growth by giving cash bonuses to mothers with more than one child has crumbled before the Constitutional Court, on the grounds that it is discriminatory.

The court ruled on Wednesday that the government’s provisions in the child protection law, envisaging state benefits only for mothers that live in municipalities where the annual birth rate is below 2.1 children per 1000 people, cannot stand.

From now on, all mothers living in the entire territory of Macedonia who give birth to a second, third or fourth child, will start receiving money from the government.

Last month the Court also banned similar provisions in the health insurance law that only applied to some municipalities.

The conservative VMRO-DPMNE’s proposal stipulated that, starting from this year, parents in municipalities with a low birth rate will receive state support of around €90 for their second offspring for the first nine months. If they decide to have a third child, they are eligible for €120 support over a ten year period. Should a couple have four children, they will receive about €190 euros for 15 years.

However, only two municipalities with an Albanian majority fulfilled the birth rate requirements, with the rest populated mainly with Macedonians.