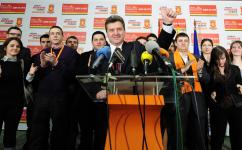 This election”opens the European perspective for Macedonia” Ivanov said. He noted his priorities would be EU and NATO membership and solving the long standing name dispute with Greece.

With turnout just barely over the required threshold of 40 percent out of over 80 percent of counted votes Ivanov won 371.000 votes, while his opponent Ljubomir Frckoski from the opposition Social Democrats won 203.000 votes.

Frckoski conceded defeat and said “now god help Macedonia” The Social Democrats said the elections were peaceful but far from democratic, sighting numerous irregularities and pressures on voters by the ruling party.

Ivanov’s victory cemented the power of PM Nikola Gruevski and his party which now besides the presidency controls majority in parliament and most municipalities including the capital Skopje.

A low turnout of voters for the presidential poll was apparently evident in ethnic Albanian populated areas. Ethnic Albanians make up one quarter of Macedonia’s population.

The domestic and international monitors so far have noted several minor flaws in some places. Group voting was mentioned as one of the most frequent error.

This poll was seen as a test of the country’s democratic credentials. The vote was closely monitored by the European Union after last year’s June general election was marred by violence and fraud in ethnic Albanian areas. As in the March 22 first round, that the international observers gave green light to, the police were present at each of the around 3,000 ballot stations in order to ensure peaceful voting.

If Macedonia gets good grades for the second round of voting as it did for the first it can hope for a swift removal of EU visas put up against travelling Macedonian citizens and a date for the start of its EU accession talks this autumn.

The country has been a EU candidate state since 2005 and last year the EC said Skopje is still not ready for the start of accession talks largely because the violence and fraud allegations that marred the 2008 general election.