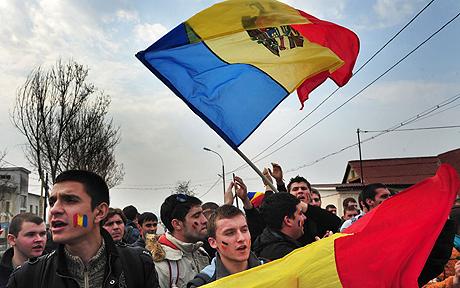 Moldova sank deeper into political crisis on Wednesday when its government accused Romania of organising an “attempted coup” and ordered its ambassador out of the country.

Mobs ransacked Moldova’s parliament and its presidential office on Tuesday after the Communist party won a general election.

President Vladimir Voronin, a Communist, said this amounted to a Romanian plot to overturn the result of the poll.

“Certain political forces in Romania are behind this unrest,” he said in a televised address to Moldovans. “The influence of Romania is felt very strongly here, as is the hand of Romania’s secret services. Our patience has its limits.”

Mr Voronin said he would close the border with Romania and the government later gave its neighbour’s ambassador 24 hours notice to leave. Moldova was part of Romania until 1944 when Stalin annexed the region to the Soviet Union. While Moldova gained independence in 1991, Romania has strong cultural ties with the country, which also has a large Russian minority concentrated in the breakway region of Trandniestra.

Romania officially denied any involvement in its neighbour’s turmoil and described Mr Voronin’s allegations as a “provocation”.

But the impoverished country could see further demonstrations against a government which many regard as corrupt, ineffective and now illegitimate.

Mr Voronin has threatened to use force to crush any violent protests, while a shaky agreement between the government and opposition leaders to recount the votes in Sunday’s election appears to have unravelled .

Moldova’s internal divisions are comparable to those in Ukraine and Georgia, where governments were toppled by revolutions in 2004 and 2003 respectively.

Moldova’s Communist leaders, who have Russia’s broad support, are increasingly at odds with a restive urban population that favours closer integration with Europe and even reunification with Romania.

When they attacked the country’s parliament, many demonstrators waved Romanian and European Union flags – a fact that was not lost on Moscow which is anxious to keep its influence in former Soviet Republics, especially those with large Russian minorities.

“We all saw under which flags these outrages have been carried out and we hope that the European Union will make most serious conclusions,” said Sergei Lavrov, the Russian foreign minister.

Observers from the Organisation for Security and Cooperation in Europe (OSCE) gave the election a clean bill of health. But Baroness Nicholson, a Lib Dem peer who was on the observer team, said that Russia had influenced this conclusion and she had misgivings about the poll. “Our report was much too warm and friendly towards that vote,” she told the BBC. “The problem is that it was an OSCE report and in the OSCE are the Russians, and their view was substantially different from my own. I find it difficult to endorse the very warm statement from the head of the OSCE.”