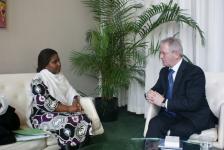 Gambia recognized Kosovo last night, becoming the 57 state to do so.

Located in Western Africa, the ex British colony’s population is 90 per cent Muslim.

Kosovo declared its independence from Serbia on February 17th, 2008, and has since been recognized by 57 sovereign states, amongst them, 22 EU member states.