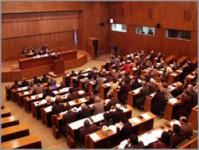 Legislators from Kosovo’s assembly gathered for a special meeting on Wednesday to mark the one-year anniversary of the country’s first constitution as an independent state.

Kosovo declared independence from Serbia on February 17 of last year and agreed its first constitution on April 9.

The constitution emphasises minority rights and protection in order to accommodate the interests of the Serb minority, which has opposed independence and discredited the constitution.

Kosovo’s President Fatmir Sejdiu announced last year: “Serbs are the citizens of Kosovo. This constitution is also theirs.”

However, parliament speaker Jakup Krasniqi has admitted the constitution has still not been adopted in all parts of the country, especially those where Serbian government parallel structures still exist.

“There are still difficulties in implementing the constitution in the whole territory of the country,” he said on Wednesday.

Meanwhile, Kosovo’s Prime Minister Hashim Thaci and President Fatmir Sejdiu have proclaimed that every institution has adopted the constitution, including those with international mandates, such as the EU rule-of-law mission, EULEX.

Kosovo’s constitution was officially put into force on June 15, 2008.