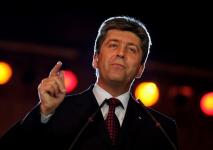 Bulgarian President Georgi Parvanov has vetoed a disputed amendment to the electoral law that was approved by the Socialist-controlled parliament ahead of general elections in July.

One day after the changes were approved by lawmakers, Parvanov warned an amendment raising the threshold for party alliances to enter parliament could create instability.

Under the changes approved on Tuesday, alliances of two or more parties needed 8 percent of votes to enter parliament, up from four percent earlier.

Parvanov dismissed the change as “unfounded” and sent the whole law back to parliament for an “immediate” revision so as not to delay the general election scheduled for early July.

“The imposition of high electoral thresholds limits political pluralism” and would lead to a “substantial narrowing of the pool of political parties in parliament…which, in turn, might create instability,” Parvanov said in a statement.

The right-wing opposition slammed the changes as an attempt to prevent a recently formed coalition of the Democrats for a Strong Bulgaria and Union of Democratic Forces from entering parliament. Political analysts have also suggested the changes are likely to benefit the Socialists, who currently dominate parliament.

Parvanov also criticized another amendment whereby 31 of the total 240 deputies – one for each of the country’s 31 constituencies – will be elected directly.

The president said the move was “merely a first step in the right direction” as the number of directly elected candidates should be higher if parliament wanted to overcome voter apathy.

Bulgaria has so far elected its parliament on a proportional basis, where people vote for party lists. The country is scheduled to hold its general election July 5.